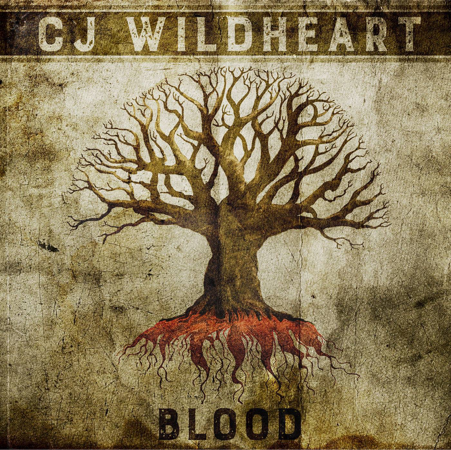 There is beauty in the poisoned blood

It is interesting that CJ has adopted the Wildheart name for his last couple of albums. There has been much conjecture on social media about his right to use the name – most of this directed at him from Ginger, the former (current?) singer in the band.

It is a shame that it has come to that, because on that debut EP, that incredible debut album, and all the brilliant albums since,  it was CJ and Ginger right up the front trading licks and lyrics on “Caffeine Bomb” and generally making sure that they were in the coolest and arguably most dangerous band on the planet for a while.

There is an upside to it, though. It means that reviewing CJ’s albums these days is easy. Because you don’t have to be shy of mentioning the band. If he’s happy to use the name then, sod it, we’ll compare the sounds too.

In the case of “Blood” it’s a good job, because there is little doubt that the ten songs here are infused with much more of the Wildhearts spirit than anything else he’s done away from the band.

His third album in as many years starts with something of a punk slammer, “Tea Leaf” also boasts a riff that comes straight off “Chutzpah!” era stuff from that other band. It is – and it is not alone on this collection which crackles with energy and an undercurrent of violence – very heavy. It is a world away from the “Sitting At Home” melody of Honeycrack and it is a long way from the “Strawberry Ice Cream” happiness of The Jellies.

Except, that is, for one thing. It’s still CJ and he still sounds like CJ and still has that instinct for melody that he always has. Even on “Gutless” – which dismisses someone as a “Two-Faced prick” and is probably the only song in the world to describe someone as a “blood sucking haemorrhoid” he still sounds like he’s smiling. That is both his genius and his curse.

“Blood” is far more of a whirlwind than you might imagine – in part because CJ was ill during the making of the record and used these songs as catharsis. “Lazybones” has the same vibe as those Wildhearts B-sides from 25 years back and “Beak” is so catchy that it is effectively power pop on turbo charge.

“50 Per Cent Indian” is effortlessly acerbic, but simultaneously shiny fun (perhaps the only one that might just about have fitted with Honeycrack’s social conscience), “Kiss It” is as simple as a boot to the balls – and doesn’t half sound like it should have been on “Fishing For Luckies”.

The condemnation of the social media generation in “Plastic Invasion” shows the fire that is burning here, and although “Itch” might announce itself as if its at a rave in the 90s, then perhaps anyone with a grasp on CJ’s history might have an opinion as to what he’s talking about in its chorus when he says: “looking back we were stupid beyond belief, and all our chances we just pissed them away,” and “Lost In The Game” – which ends things here – is another with an electro feel in places.

Elsewhere on the album there is a cover of Weezer’s “Tired Of Sex” which shows the chances being taken here. Make no mistake this is a very different record to last years “Robot” and if it takes a listen or two to fully appreciate the skill, when this truly hits home, “Blood” becomes a treat.