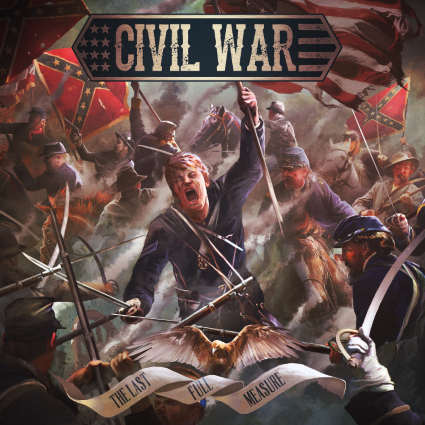 What’s so civil about war anyway?

What do you get if you cross Sabaton’s founding members with Astral Doors’ one time vocalist? The answer, as everyone with a love for power metal knows by now, is Civil War.

Rather more important is the fact that what you also get is a hell of a record. 2015’s “Gods And General’s” was a stellar affair which saw the band really find their feet and now, just over a year later comes its equally polished and bombastic “The Last Full Measure”.

Power metal, lets be honest only works if it is the musical equivalent of Rik Mayall’s Lord Flasheart character. Just like the man who once said to Captain Darling in Blackadder: “Captain Darling? Last person I called darling was pregnant 20 seconds later.” Then this type of metal doesn’t do demur. It doesn’t want you to console it, it wants to brandish its sword of metal and go into battle.

Which is precisely why Civil War are so damn good at it.

Of course it all sounds a bit like Sabaton, but equally, while their original band – and perhaps the genre’s best known crossover act – might have done something like opener “Road To Victory” they wouldn’t have done it quite this way. There’s more of a European, keyboards parping and all double kick drum thing going on. Similarly, “Deliverance” is off and running in widescreen, and as OTT as you like.

“Savannah” adds some pianos before going off for a march, and “A Tale That Should Not Be Told” is perfectly happy to add a little bit of foreboding before becoming “….Measure’s” true fists in the air moment, while “The Gangs Of New York” has echoes of everything from Hammerfall to Europe as it tells it’s tale.

That said, it is a little more diverse than you might ordinarily imagine. “Tombstone” is a genuine oompah effort, before turning into Dragonforce in its humongous chorus. You can also add the opening line of “Doc Holliday had a very lousy day” to the mix and conclude the Wild West has never sounded like this before….

For all the knockabout stuff, when Civil War get serious, they are one of the best at what they do. “America” with the twin guitars of Petrus Granar and Rikard Sundén to the fore in an almost Thin Lizzy riff, is almost perfect and Nils Patrik Johansson’s vocals soar with the best of them.

Barely a duff moment here, “Gladiator” appropriately wants a scrap with anyone, “People Of The Abyss” has an epic feel and the title track, which ushers itself in on the back of a mighty keyboard piece from Daniel Mÿhr (who excels throughout) has the feel of something on the soundtrack to a fantasy movie.

We perhaps shouldn’t be surprised in the slightest that these men can knock out a power metal record every year. There are, after all, few better than them at it. What perhaps is unexpected is that Civil War just keep getting better and better. However you measure it.