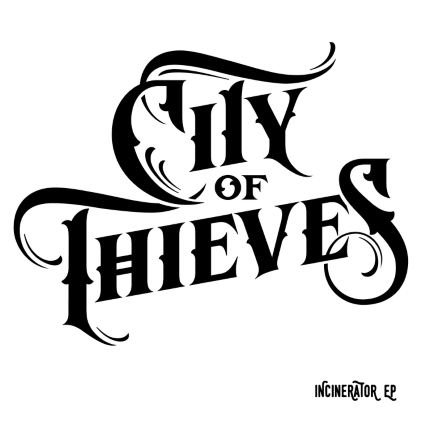 Just when it happened is kinda hard to exactly quantify, but it is most definitely occurring. Hard rock, well, it’s back, back back.

Maybe it’s the thought that all this post-this and post-that genre classification has been done to death. The best bands never needed to be post-anything anyway. They were it. Iron Maiden, Thin Lizzy, Black Sabbath, never needed any kind of classification – and more appropriate for this release perhaps is the thought that Guns n Roses’ appetite for all kinds of destruction didn’t seek anyone’s validation but their own.

With that in mind then, possibly, comes this frankly swaggering five tracker coming straight outta London, but with the attitude and hooks of the Sunset Strip. City Of Thieves clearly had a vision anyway, but it’s one which Producer Toby Jepson was on hand to refine and most probably take the rough edges off too.

This is very much an album that has Jepson has his prints on. There’s a track in the middle, the marvellous and absolutely snotty “Buzzed Up City” that drips with the same youthful enthusiasm that his own Little Angels came down the M1 from Scarborough with all those years back. Rounding on people with “Cocaine noses” and “Facebook whores,” it provides a raw highlight here.

Not that it’s a flash in the pan. “Incinerator” had already proved that rather admirably. The lead single here had built itself a mighty riff somewhere between early Soundgarden and Classic Brit grit and wrapped itself around a hook and a chorus that almost dares you not to take notice of it, and if “Lay Me To Waste” does something a little more down and dirty, it does it with an equally dirty laugh and a swagger that Voodoo Six used to muster.

“Here Comes The Shot” is like Ratt would have been given a geographical change, and is all the better for it, while the closing acoustic live version “Mr 50/50” is part whiskey soaked bar room bluster and part Bad Country.

You hesitate to make bold pronouncements these days as to who is going to make it big. What you can however be certain of is this: City Of Thieves are absolutely certain they will be huge. Back in the 1980s MVM used to read tales of support bands who blew bigger acts off stage and became stars themselves. Given half a chance, you’d suspect that City Of Thieves would be the 21st century version.

A five track study in self confidence.