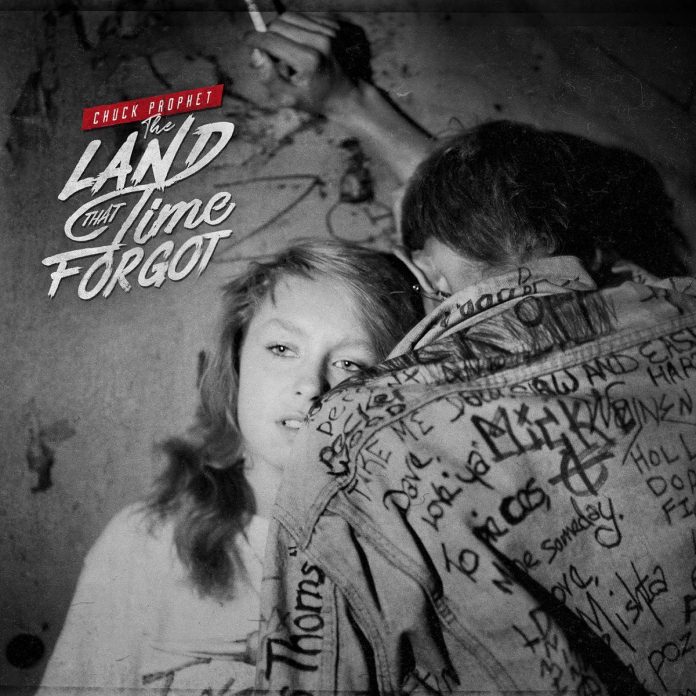 There’s a line in some interviews that Chuck Prophet has been doing in advance of “The Land That Time Forgot” that caught my eye. Chuck, I am guessing, likes it too given he keep’s repeating it, but: “Turns out you can make a lot of noise with acoustic instruments, if there are enough of them.”

That seems to frame the record, because “…..Forgot” is varied. As if the fact it was recorded in upstate New York rather than San Francisco, has led to a real “lets try and see what happens” approach.

Certainly, musically at least, it has little to do with modernity. Which is at odds with the lyrics, given that they are rooted in current affairs. Perhaps just another of the incongruities here.

The opener “Best Shirt On” has a kind of disco touch. A light air. It’s in the harmonies and you can see this on a Little Steven record, maybe. It’s catchy too. Prophet has always had a knack. I first got into him after his brilliant “Temple Beautiful” album in 2012, and this has the same effortless air.

He uses words so deftly too. No one else could find the angles he does on “High As Johnny Thunders”, say, and he mentions the debt to Dion DiMucci in the guitar playing too. “Marathon” is an interesting one, because on one hand it’s the type of low-slung rock n roll that you might more readily associate with CP, but its got that acoustic thing too. And the harmonies are phenomenal. That he can switch moods, so quickly and so well on the country (you hesitate to call it “Americana”) strains to the mournful “Paying My Respects To The Train”, is a mark of real skill.

“Willi And Nilli” is storytelling of a true troubadour, which after invoking Metallica, turns out to be the tale of a pair that are searching, perhaps for lost youth, lost love , or a fantasy they could never attain. Either way, whatever it is, this is a real gem, and real craft.

“Fast Kid” exists on a dirty blues, Stones-type lick, and listening to the news, as I did just before writing this, gives “Love Doesn’t Come From the Barrel of A Gun” and its funkiness, a greater resonation.

Perhaps the best, though, was “Nixonland”. Written from the experience of Prophet, who grew up in Nixon’s hometown. The way it weaves real life with story, fantasy, and hallucination is worthy of Dylan.

It’s surprising, perhaps how simplistic some of this sounds. “Meet Me At The Roundabout” is as folky as something from Laurel Canyon in the early 1970s, sun-kissed and blissful, and likewise, there’s no way that “Womankind” sounds like it came out in 2020. It did, it’s here. But there’s something of the Jersey boardwalk about this.

Further examples of the breadth of the sonic template are probably not needed, but “Waving Goodbye” is gentle and mournful all at once. “Get Off The Stage” is none of those things. An excoriation of Trump, it finds a humour in the situation. A gallows one, maybe, but maybe if you didn’t laugh you’d cry and all that.

“The Land That Time Forgot” is clever, supremely well put together and the sound of Chuck Prophet switching things up, while retaining what makes him great in the first place. No mean feat, and this is no mean album.

Previous article
BAND OF THE DAY: THE PILGRIM
Next article
WINDY DAYS