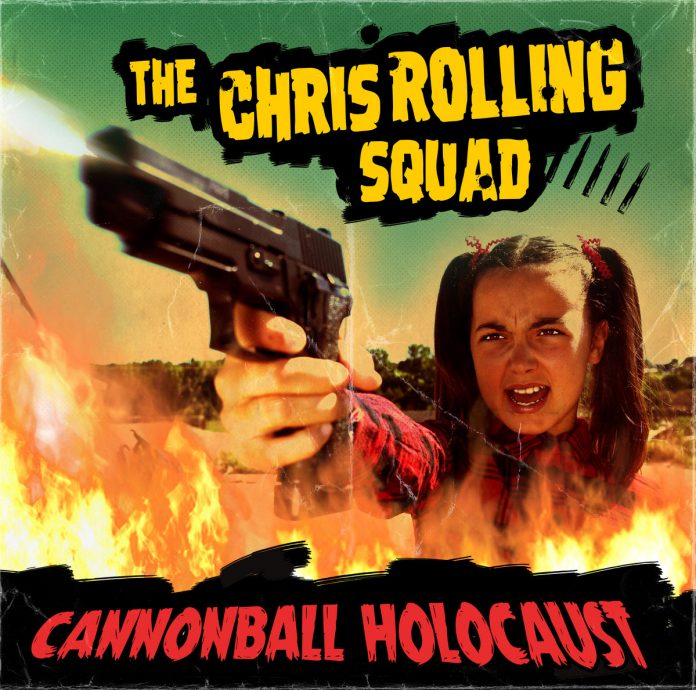 No joke here, we probably get 200 emails a day at MV towers. About 50 of these are some band or other who are explaining to us that we need to review the album they’ve just put out and which they are “Stoked” to release (and I swear, If I was in charge of the world, that word would be the second thing we got rid of after Facebook). So far so tedious.

I’ve been doing this website everyday for the last seven years, so I know what I am going to review, generally. That all being said, in those seven years only one band has ever sent me an email helpfully explaining that they are “the missing link between Bo Diddley and Slayer”. Right, cool. Lets go.

That band is The Chris Rolling Squad and “Cannonball Holocaust” is their third record. That’s the boring shit. And this record deserves no more boring shit.

The cover tells you what you need to know, largely. It looks like some b-movie that Rob Zombie is the only one to have seen, and the music is in the same vein. Some weird, kinda scary roller-coaster, that is jam packed full of excitement and should not make sense in honesty. But then somehow does.

“Wild Time” – which helpfully starts with the words “keeping the party going all night long”  – is a song so catchy and weirdly psychobilly that if it were a Volbeat tune they’d all be sticking another wing on their houses. As it is CRS are from the south of France and seemingly do this for no other reason than they really want to.

“Hate 2000 Blues” is probably the acid test. If you fancy a punk rock song with a hell of a harmony and the hook line “I like to see you cry, I like to see you die” then the lads have got you sorted. Moreover, they won’t be offended if you leave. They are playing too loud to hear the door shut.

The Slayer thing? Well that’s on “Trapped Inside” – a proper moshpit rouser – a fact they balance out with “Bring Down The Hammer”, which has a purity of rock n roll about it, maybe a hint of Thin Lizzy, while “Straight Down To Hell” is entirely the sort of thing that is made for driving for 100mph in the fast lane. With your car on fire.

Tracks just come and go in some glorious blur. As big a sugar rush as a two year old on a Skittles binge, “Faster” doesn’t need telling it sounds like Motorhead, and “Crazy Little Boy” is more filthy boogie fun in one minute 49 seconds than most bands manage in their careers.

That’s pretty much true wherever you look, to be honest. Brice Duvall must have the fastest fingers in the west on his bass – “Revolution All Around” sees him to the fore again, while “Desperate City (I Get The Fuck Out)” rages at something, its not sure what.

“Staying Home With Mommy” makes “Johnny B Goode” look like a lot of fuss about nothing, while “You’ve Been Gone” (the longest here at three and a half minutes) is vaguely serious and grown up.

Largely though, this is three blokes living out their dreams. “Hollywood” is proof, while “Boom” is so full of harmony that its difficult to know where to start and “I Just Can’t Help Myself” is aptly named, because this is the work of men that live and love this sound.

Back in the late 90s, early 2000s my postman used to be bringing records down the drive every day, ones I was collecting from all over the place in record clubs. Bands like Glucifer, B-Movie Heroes,  Zeke, Peter Pan Speedrock and just about any derivative there of you can find. Bands who played it pure, nasty and above all, for fun.

France might have not been the first thought when looking for their natural heirs, but no one told Chris Rolling or indeed his Squad. “Cannonball Holocaust” is here to do some serious damage.