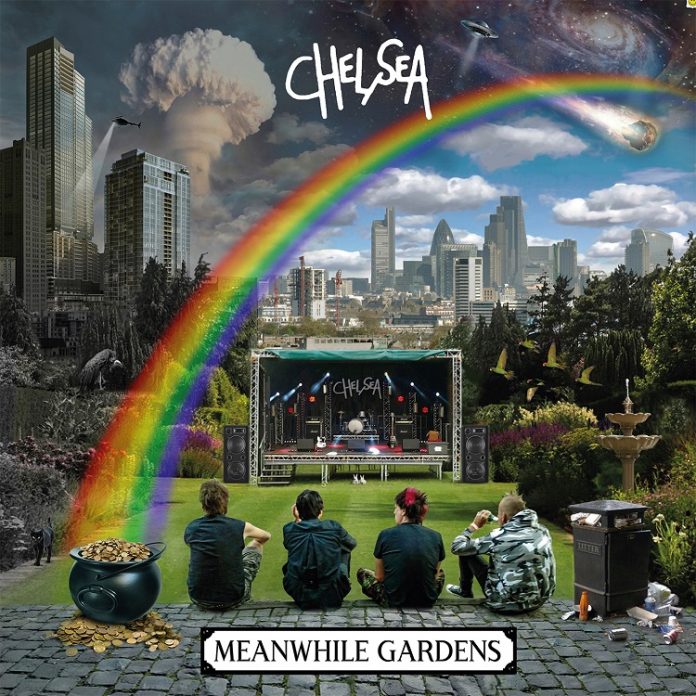 My dad’s dad died when I was seven years old but I still remember one or two things. He was once walking down a private road – a cut through to the house my uncle had moved to from where nan and grandad lived – when some bloke marched out and said: “Excuse me, you don’t live here, please refrain from walking down here.”  My grandad – and you are best to do this in a Staffordshire accent replied: “Yes pal, and you want to think yourself lucky I don’t, because if I did, you’d have a lump of dogshit on your doorstep every morning.” And carried on.

His core belief, though is one that has stuck with me throughout my life: “Money doesn’t talk son,” he once told me. “It shouts at the top of its voice.”

Now, I am not for a second here claiming that my grandad was in anyway a punk rocker (unless you count the rat pack as punks) but he might approve of the sentiment in “Cash”, one of the earliest songs on “Meanwhile Gardens”. “If you’ve got the cash, you can do anything,” sneers Gene October, and lets be honest, he’s not wrong.

Bear in mind too, that these songs were written before the pandemic, you can only imagine the anger that would be in any new material, given the fact that this simmers with rage anyway.

And yet, in fairness, it all starts in relatively calm fashion. “Meanwhile Gardens” – the track – starts in jaunty indie-punk fashion, all harmony and jangle that essentially explains where The Libertines stole every one of their songs from.

By “Here And Now” though, the vibe has changed, as they ruminate on the pointlessness of war, and mothers tending graves, but this is Chelsea, right? This is their 45th anniversary, this is what they do, so its full of scrappy pub rock charm. “The Great Divide”, equal parts 3 Colours Red and Eddie And The Hot Rods, is designed to be sung on the terraces, and you know that Nic Austin is playing his guitar down by his knees at all times.

“It’s Friday” takes place in the boozer. “My team is gonna win” is a key line here. It doesn’t matter which team (its not mine, we never win) just that everyone wins, that’s the point, and the sense of community is all over “Shine The Light”, and goodness me, if these aren’t the catchiest gang in town, then I don’t know who is.

Maybe the sense of celebration comes from the delving into history. Former members of the band appear in guest roles,   Martin Stacey and Bob Jesse from the 1977 line up, James Stevenson from the debut album, Rob Miller from the ‘Traitors Gate’ record, and all of this means that stuff like “Why Aren’t We Here?” and “Cold Cut” (which I was convinced was called something else when I first heard it….let’s leave it there) have a real camaraderie.

Pretty much everywhere you look here, there’s a very English chug. “Worldwide Domination” has a bit of The Professionals about it, and there’s a touch of “Holiday’s In The Sun” in the backing vocals, while Mike Spenser from The Cannibals guests on harmonica on the brilliant “Ladbroke Grove”. In truth, though there’s barely any dips in quality throughout, “Falling Apart” gets the gang back together, as it were, one last time, and there’s just a hint that these boys could find trouble anywhere still and “Destination To Nowhere” underlines that beautifully and “Little Venice” finds a bit of a Latin theme, as the summer breeze wafts.

The last line – well I hope that it never ends – could be about anything, but its difficult to think that it might not be about the band itself, their legacy was cemented decades ago, but this proves how much they still have left.