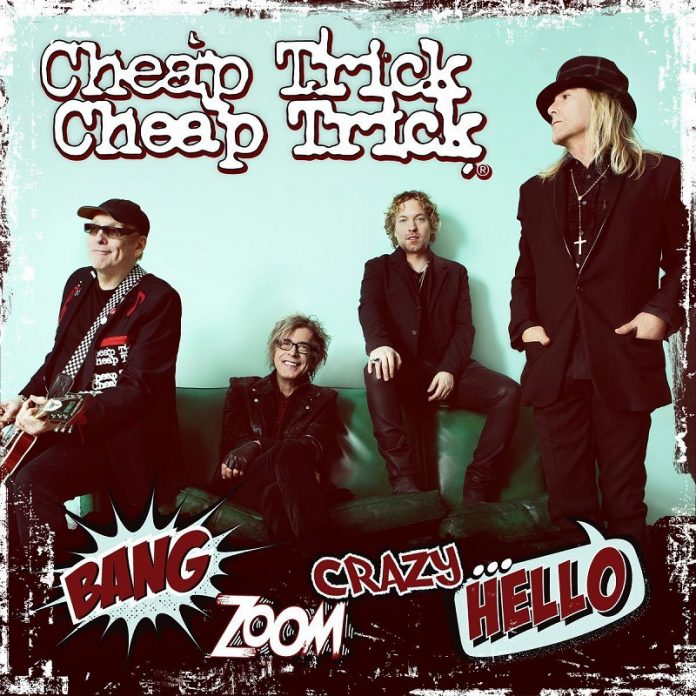 All other pop rock bands, take note: this is how it’s done

They’ve enjoyed 41 years together, made 16 studio albums and sold in excess of 20 million albums, so you can perhaps forgive Cheap Trick a few years off. As it is “Bang Zoom Crazy….Hello” is their first album since 2009, and if the worry with all the legends is how they’ll rock up (all meanings of the phrase intended), then fret not.

Cheap Trick are very much firing on all their considerable cylinders here.

Indeed, it takes all of about three seconds of the opening of these 11 tracks, “Heart On The Line” to allay any fears as to whether they could still cut it. It races at you like some turbocharged ZZ Top boogie, and soon Robin Zander’s “balls are in my pocket” and suggesting his mother never warned him about girls like this.

Suitably revved up and looking for trouble, the train has left the station and it ain’t coming back until it’s painted the town red. There’s a gorgeous riffs’n’harmony vocals combo on “No Direction Home” and the choruses here aren’t designed to be forgotten.

This is a band that simply does what comes naturally, it’s just as well really that what comes naturally is so damn infectious, “Do You Believe Me” is built around a chunky riff from Rick Neilson, and a huge hook, while “Blood Red Lips” is basically a distillation of the essence of four decades of Cheap Trick in two minutes 58 seconds of ebullience. Elsewhere “Sing My Blues Away” is most aptly named. In lesser hands it would sound trite. Not here. It’s shimmering and summery and just about perfect, while “Roll Me” – another three minute glitter cannon of a thing – is almost casually delivered as if not a big deal.

There’s scarcely a let up on “……Hello” and “Long Time No See” adds some keyboards, “The Sun Never Sets” – which for this album is an epic at a whopping four minutes – does mid-paced chugging and a Queen-like soaring chorus, and the finale, “All Strung Out”, does a disco stomp even better.

The Cheap Trick legacy, even if it was finally recognised with a trip to the Rock n Roll Hall Of Fame last year was long since assured anyway given their clear and obvious influence on everything from the likes of LA bands such as Poison to Brits like The Wildhearts.  Given that, you can forgive – and maybe even encourage – one piece of self-aggrandisement. It comes on “The In Crowd”, tucked away towards the end of things.  “Other guys imitate us,” sneers Zander. “But the original is still the greatest.”