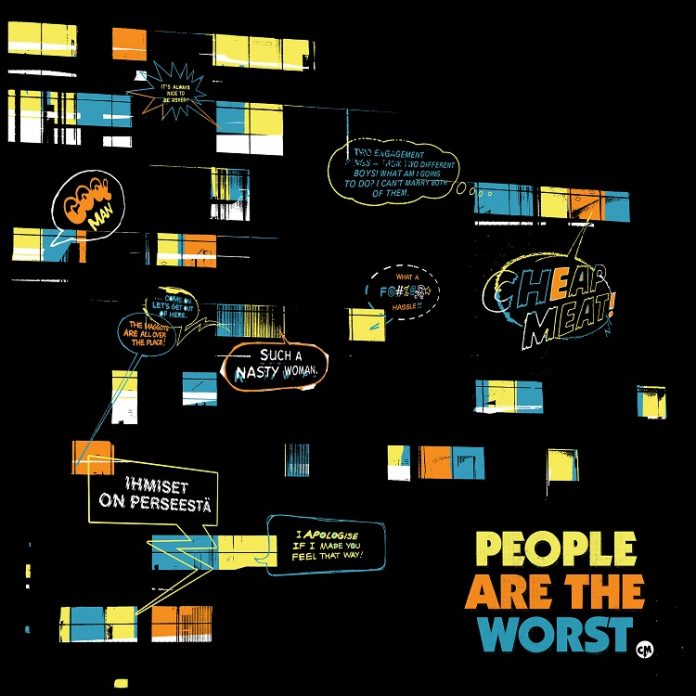 Before we start, I’d like to take issue with Cheap Meat.

Look, the album is phenomenal, but on it, there’s a song called “Eddie And Valerie”, which deals with the lifelong, but slightly unconventional, love affair between the late, great Eddie Van Halen and his wife.

The chorus says these words “I don’t care, if you’re pro-Dave or Sammy.” Now, I am Sammy, as it goes, but where is Gary Cherone? Why is he being overlooked? Why is Van Halen 3 not in the canon?

It’s an outrage, and there should be a stewards enquiry.

Anyway, “People Are The Worst” rules. It’s fantastic. It’s one of those records – a bit like Puppy’s from a couple of years ago, that defies rational explanation. Take “….Valerie” for example. In the middle of that, there’s a genuine EVH-like solo, from out of nowhere, and you aren’t surprised.

To be fair, any album that begins with the thought “from top to bottom, I love your bottom”, as “Spoons And Cutlery” does is on to a winner, and then before the first chorus to have added “I’ll buy your Meal Deal, girl for just one kiss”? Well, damn. Where’s the fan club?

The mention of the mighty Puppy at the start was deliberate too. Cheap Meat have got the same kind of sound. Heavier than you expect, but with a real ear for melody, and as “Pretzels And Poptarts” proves, they’ve got a bit of a Dinosaur Pile-Up thing going on.

The three of them (two met at a pub quiz and they recruited the other on Gumtree) have a real bond, that’s evident. Bassist Pete and singer/guitarist Rob both have depression issues, and those who suffer too will recognise the form in the words of “Lust And Nothing More”.

They have a love of the US college sounds of the 90s too. No one loved Fountains of Wayne more than me, so that’s cool, but as the lugubrious piano of “Pasodoble” gives way to the type of riff that Ash made a career of.

In fact, without knowing anything about them beyond their press release, I would guess we share plenty of musical tastes. Cheap Meat like riffs and grooves. “Marigold Moon” is built on one and as much as this would disappear down a power pop rabbit hole at the drop of a hat, they have too much metal in their mix to do it fully.

“Blasé” does the kind of thing that country pop stars do to get a gold record, At least to start with. The metronomic drums give it away. But then it thunders, a proper arena filler, this. While “A Pop Of Bubblegum” will get those of us who worship Silver Sun (R.I.P James Broad) all teary eyed.

There’s one last twist, though.  In a world of three minute pop songs, this thing does a full seven minute epic that recalls “Do You Know What I Mean?” era Oasis, and takes aim at “forum trolls” as well as propelling them into a whole new area.

Look, if I haven’t made it clear enough, “People Are The Worst” is the best. Genuinely original and genuinely brilliant. The best debut album of 2021? Who knows, its 26 days in. What I will say is this, anything that’s better than Cheap Meat will be very tasty indeed.