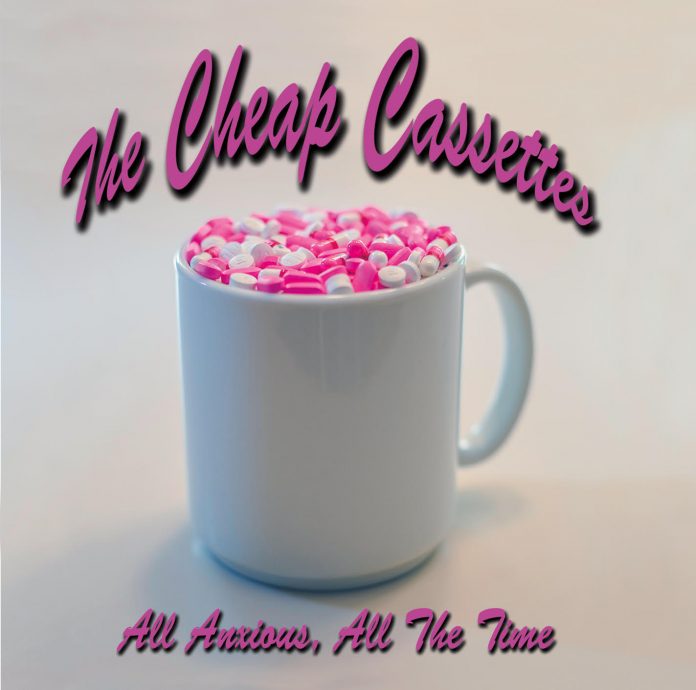 Glorious power pop from the home of grunge

Often on this site MV will write about music and say that it “started just up the road” or some such smugness (and being based in Birmingham, UK, we’ll continue to take every opportunity to remind the world we gave you all Black Sabbath and Judas Priest by the way) but try as we might, there’s one thing that we Brits have to admit that we can’t do as well as our friends across the Atlantic.

Sure, we had a go with the wonderful Silver Sun, and Last Great Dreamers, but they are few and far between.  Whether it’s the Replacements, Cheap Trick  or MV’s faves The Baby’s or 1990s heroes Redd Kross, American bands seem to effortlessly churn out hook-filled gloriousness that sounds happy even though it’s not, whenever they damn well please.

And there’s an example of it, right here.

“All Anxious, All The Time” is what happens when two Power Pop lifers called Chaz Matthews  and Kevin Parkhurst– who were once in a band called the Dimestore Haloes out of Boston – move to Seattle, play in millions of bands, meet up with a fellow Boston native Mike Isberg and form a rock n roll band. If you follow the maxim that all three piece bands rule (this is true) then you won’t go far wrong here.

The album took four years to come together from 2011, but is finally getting a proper release – and it is more than deserving of it too.

Kicking off with the title track – essentially three minutes of chugger that takes in everything that’s ever been cool. Ever. Before stomping in with a chorus – is a fine example of what you will get throughout.

As if to prove this wasn’t a fluke, “My Little Twin” does it all over again, working on the principle of “don’t bore us get to the chorus” there is just a glee about the music here. “Wreckless” combines rueful lyrics with guitars that are a little more chunky and “Sieg Heil (Means I Love You)” has the kind of vibe that early REM used to.

As ever this type of thing lives and dies by its guitar work and the fine lead to “Good And Shitty” makes that a cut a real treat, while there’s a real blue collar – almost Springsteen circa “The River” strut to “Get Low” but if you listen closer you will hear lyrics like “she got a mouth like a pretty chainsaw/rippin’ into my heart/ lay down her Marshall Law” which hide some real feeling here.

“Disappear With You”  has echoes of The Kinks as it seethes with small town frustration and “Seconds Of Pleasure” is a little more expansive and perhaps a little more harder edged than many of its brethren – it is not less entertaining however.

“Big Dumb Town” has – to these ears – a feel of The Ramones, and “Girlfriend” is the ballad. Well, kinda. It has the same riff, just slowed down, and an undercurrent of violence about the lyrics.

Perhaps the best of all, though, is the last one. “Black Vinyl!”a deliberate 1960s homage you’d guess, it races around like a souped up version of “Pretty Woman” and comes with a vocal delivery that Ian Hunter would have killed for in his Mott The Hoople days, and the bonus track “Whips And Furs” is another that keeps it simple, imploring us to “dance to the music”.

Such a request is easy when The Cheap Cassettes provide the soundtrack. “All Anxious, All The Time” is an album played by three men who are evidently steeped in this type of thing. They’ve delivered a collection that belongs on the shelf squarely alongside those of their heroes.