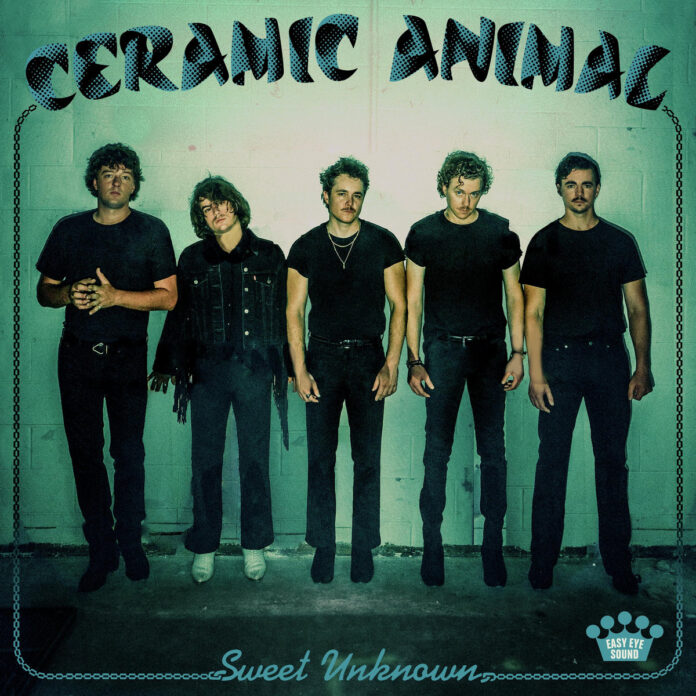 Ceramic Animal hail from historic Doylestown, Pennsylvania and features a trio of brothers, Chris Regan (vocals, guitar), Erik Regan (drums) and Elliott Regan (vocals, keys), along with childhood friend Anthony Marchione (guitar) and Dallas Hosey (vocals, bass). They fuse post punk, psych and seventies pop and funded, produced and self-released three albums which attracted a large and far flung fan base. Their fourth album `Sweet Unknown` is released this month and was recorded with Dan Auerbach at his Easy Eye Sound studio in Nashville. The Black Keys frontman has also signed them to his own label. The guys played in a series of cover bands throughout high school and college, but their first and greatest influence was always their father. He raised them on classic rock, such as the Stones, Sabbath, The Kinks, he couldn’t play, but he had an ear for music and gave them so much great feedback early on.

to relate to a tale of getting involved once again with someone whom maybe you should have avoided but you think that if you take it easy this time all will be good. There are some really simple but so effective guitar chords throughout. There`s a much more edgy faster paced offering with `I Can`t Wait` which appears to allude to the desire of getting back to that someone special. It`s a real toe tapper of a track which has the whole band coming together to drive it along. There was an almost knowing, longing inflection in the vocal delivery.

`I Love A Stranger` is a more soulful piece with hand clapping shared intermittently throughout, dreamy organ keys and vocals that were quite breathy at times. It gained a more funky texture as it progressed with some delightful chugging guitar riffs and a strap line of “how did we get here and where do we go now?” that will get into you head and have you singing it for the rest of the day. I read that `Long Day` was a hand-on-shoulder anthem which follows a couple trying to stay together even when the world intrudes. It`s a quite mesmerising laid back submission where you can almost feel the anguish in the vocals. There are some sublimely understated guitar chords and a tapped tambourine which adds to the overall torment shared.

`Forever Song` is a number made for lit mobile phones in a stadium. A quiet heartbreaker initially which grows and a song where all have their part to play. It encompasses organ keys, a steady bass and drumbeat, lonesome guitar chords and vocals that could make you shed a tear. Wonderful. The title track `Sweet Unknown` is a ballad which enjoys some sweet harmonies. A thoughtful and reflective musing which has a brushed drum and bass line at its heart along with some shimmering guitar chord riffs, piano keys and a vocal where the sorrow and anticipation is almost tangible. It brought to mind The Eagles `I Can`t Tell You Why`.

`Up In Smoke` is a light and breezy offering that brings a little brightness and will have you nodding your head or tapping your foot as it evolves. Again, we enjoy some marvellous guitar riffs and scintillating steel guitar. I have to say I loved the shook tambourine which I wanted to reach out and grab and shake such was it`s addictive naturel. We have a kind of curved ball with `Private Dancer` which is not the Tina Turner, Mark Knopfler written soft rock mega hit but something that`s a million miles away. It`s a bit stop start, a bit jagged with a chorus that`s almost shared in a rap like format with some skewered guitar sounds, hand claps and shouted harmonies. A track that becomes quite captivating in its simplicity.

`I Don`t Wanna Wait` is another composition that will leave you with a warm glow inside. It may have been just me but there was really something about this number that made me feel a little better about the world even just for a short space of time.  Fabulously upbeat and soulful and a track I have to admit I played quite a few times. The album closes with the rollocking `Valerie` which I read addresses loss, absence, and estrangement. It`s a cracker to end on and sort of combines a mixture of bands such as The Black Crowes, The Rolling Stones and Blackberry Smoke.

After listening to `Sweet Unknown` I was left thinking why haven`t I heard of Ceramic Animal before? But hey, I have now and although I’d love to keep them all to myself, these guys really deserve a wider platform and I can understand why Dan Auerbach has signed them.

Previous article
MOSH IT
Next article
HUSTLE AND BUSTLE