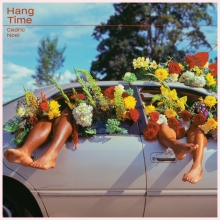 Montreal-based singer, songwriter and multi-instrumentalist Cedric Noel has spent the past decade creating soul-stirring pieces that muse on identity, Black beauty, and celebration. His music is informed by his unique worldview: He was born in Niger to Canadian and Mozambican/Belgian parents, spent his upbringing around the world, and is currently based in Canada. His new album `Hang Time` was written during a period of intense self-reflection. It explores what it means to be disconnected from place/ancestry, adopted into a multi-racial family, what it is to be Black man in a predominantly white scene, and how one can arrive at a place of pride amidst the multiplicity of self.

The album opens with `Comuu` about which the singer has shared “Lyrically, the song touches on friendship, allyship and ancestry.” It`s a quite hypnotic number that has a sort of shuffling drumbeat and repeated guitar chord allowing the vocals to gently relay a rhythmic message which includes “All I want to be, all I want to see” which becomes wonderfully mesmerising. We have a jangly guitar chord that leads us into the quite dreamlike `Headspace` which seems to grow in volume a little as it evolves but still retains that somnolent texture throughout it`s lifespan.

I have to admit i loved `Keep` which could easily have been on The Smashing Pumpkins `Mellon Collie and the Infinite Sadness` album. Cedric is joined by Lisa Conway-Bühler and they blend beautifully while singing the line “keep it together in losing yourself”. A spellbinding listen that I had on repeat a number of times. We have much more upbeat offering in `Stilling` which has some delightful guitar chords throughout.

`Bass Song` has the singer duetting with musician Ella O`Connor Williams or Squirrel Flower that according to the singer explores the depths of interpersonal constriction. There`s a consistent guitar note that guides the two vocalists through this journey with occasional keys and off kilter guitar tinges in the background. We have a song in `Born` that explores the emotionality of adoption. A pleasant number initially which is stripped back with mainly vocal and piano before it veers off into a strange musical soundscape.

`Dove` features Brigitte Nagar, a.k.a Common Holly. It’s a mellow number that I read, touches on the wanting of emotional intimacy and how hard it can sometimes be to get there, be that within friendships, family or romantically. I wasn`t sure of what to make of `A Hold On Losing` it again had a continual drumbeat with the vocals shared in an almost spoken word fashion at times.  There was a brief instrumental midway before resuming to type before it kind of fades into a ambient sonic stratosphere for the last ninety seconds or so. Bizarrely enticing.

`Okayokay` is almost inaudible initially but opens up, blossoms then bursts into an almost challenging vociferous declaration of wellbeing. We have a recurrent acoustic guitar resonance through `Allies` as the singer shares the line “Are you on my side?” and a clip of a Malcolm X soundbite is interweaved midway and overwhelms the latter section of the song.

`Nighttime (Skin)` has a similar sound to the beginning of the previous track but relates to the artist’s sense of ancestral dissociation through to a triumphant moment of pride in self-acceptance. A quite uplifting submission. Title track `Hang Time` is a quite ethereal piece that I found myself almost daydreaming to. It kind of ebbs and flows in tempo as it proceeds and becomes a little anthemic.

The album closes out with `Cozy` which begins with almost muted vocals traded between the singer and Kathleen Speckert against a distant piano based background. A synth swath joins before fading and what sounds like a tape running before some says “Thanks bye” and the album ends.

I found `Hang Time’ quite a compelling listen and encompasses tinges of folk-pop and indie with ambient and sound collages on route. Cedric Noel has a varied vocal range and this to me is an album that I’ll return to and am sure will discover something that I hadn`t encountered before.