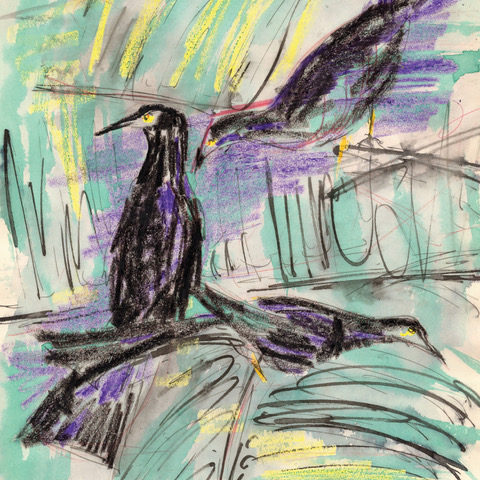 `Still Life` is Carson McHone`s third album, released last month with songs about existing within tension and surviving beyond the breaking point. These are stories of sabotage, confusion, and surrender. ‘Still Life’ invites us to gasp at our own reflection and acknowledge the unsettling beauty in this breath. The songs of ‘Still Life’ were written in quiet moments between tours and recorded away from Texas in Ontario with Canadian musician and producer Daniel Romano.

The album opens with `Hawks Don’t Share` which suggests that collaborations don`t always make the best bedfellows. It`s a larger than life number and a great introduction for me who up to now has never heard of this artist. There`s some wonderful fuzzy guitar riffs and saxophone swathes throughout that are to die for. The singer`s vocals are joyous and shared almost matter of factly or detached from what`s going on. It has keys aplenty and ends on a kind of organ blast. Title track `Still Life` seems a lot more dreamy with an almost melancholic sadness running throughout. At the midpoint we have a sort of heartbeat created by a hypnotic drumbeat and shimmering guitar chords and the singer`s gentle vocals. It returns to a more driving rhythm with occasional piano keys sprinkled throughout and an off key guitar solo towards the end.

Fingernail moons are the rounded shadows at the base of your nails and can be a sign of anaemia, malnutrition, and depression. This `Fingernail Moon` has that sense of having come through the worst of a difficult relationship breakup and finally being able to reflect back on it with less pain as time has passed. The harmonic backing vocals and accordion shared gave this number an almost heart breaking poignancy. We have a much more sense of urgency on `Someone Else` which rolls along with some cracking hammered piano keys and organ almost duelling and being goaded by the steady accompanying drum beat as the number progresses.

I loved `Spoil On the Vine` which had a wonderfully introspective meditative sense about it and was quite folky with an underlying edge or tension where you felt emotions were being kept it check. We have a  further contemplative musing with `Sweet Magnolia` which has some complimentary gentle string, brass, and a quite haunting piano refrain. A thoughtful and intense almost philosophical offering.

`Only Lovers` has horn blasts, an underlying organ refrain and a nigh on languid drum beat with backing harmonies and handclaps intermittently sprinkled throughout this laid back reflection of a romance that neither party will admit is happening. There`s a kind of fragility about `End of the World` which is led by an acoustic guitar, a sweetly illusive or imaginary piece.

`Trim The Rose` is a delightfully introspective number that begins quite sorrowful with tinkling piano keys and resonating guitar chords adding to the initial despondency before it takes off at pace before returning to its pervious thoughtful perception. Carson`s vocals were such that it became a track that will almost make you shed a tear. There was a lot going on in `Folk Song` with intricate guitar chords, a gentle and unobtrusively shared drum beat allowing the vocals to deliver a stunningly emotive portrait.

The final song `Tried` closes out this album and is an expressive and touching short stripped back musing with a strummed guitar and vocals.

`Still Life` seems almost like a snapshot in time, possibly a metaphor of how things have changed in her life having married Daniel Romano, who not only plays on the album but also produced it and her relocation from Texas to a new life in Canada. It may be a kind of soul cleansing as she begins a new chapter in her life but whatever there was so much to enjoy here. As well as providing the vocals the singer played guitar on this release and was aided and abetted in bringing her vision to life with her husband Daniel Romano (drums, bass, guitars, vocals, arrangements, percussion) , David Nardi (saxophone) and Mark Lalama (piano, organ, accordion). A new wife, a new life, a new album, it`ll be interesting to share in what happens next in this artist`s career.