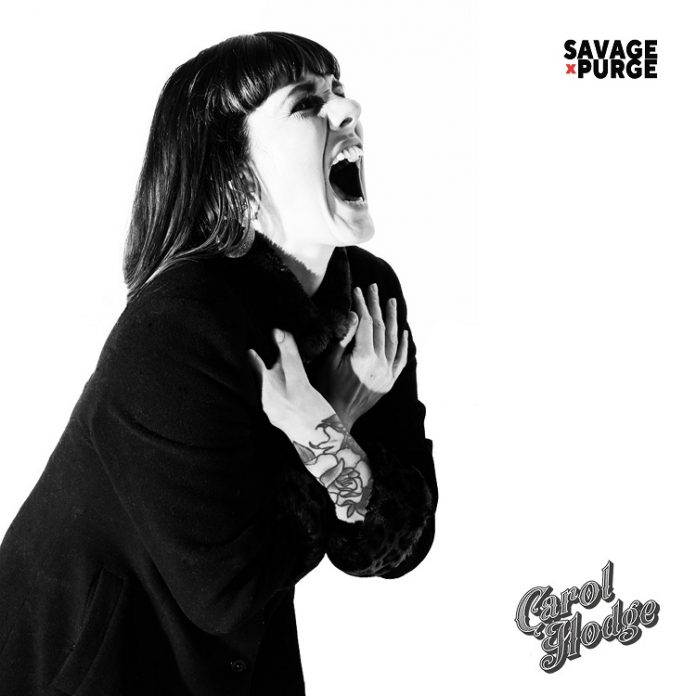 The opening of “Savage Purge” sucks you in. The first song, “Stop Worrying Baby”, begins with a tinkle that would make Ian McLagan of the Faces proud. The first verse is Americana-tinged too.

But then, well then, the chorus: “if I’ve just one life to live, if I know I’ll die alone, then just stop worrying, baby, and go and do it on your own.” As if she’s reminding herself. Convincing herself of the right course of action.

It’s then you have a thought as to what the “Savage Purge” here might be. The press release that came with it said this: “The title was inspired partly by the Post World War II épuration sauvage that took place in France, in which many innocent women were tortured.”

But I’d wager that “partly” is the point here, because where the truth ends and the character writing begins is blurred, because here, Hodge is purging the darkness in her mind.

She’s provided the vocals for Steve Ignorant’s acoustic project, but Carol has also played with Ginger and is presently in Ryan Hamilton and The Traitors. Her pedigree is there for all to see. She works with disparate people and with disparate sounds. The full range of them are here.

“…Purge” is a frequently unsettling and uncomfortable listen. The songs are eminently accessible, but that is the issue at hand. The “pleasant” music, for want of a better word (her debut solo affair was memorably termed as The Adele for people into radical politics by Louder Than War), is so at odds with the often raw and occasionally harrowing words.

“Waving Not Drowning” wrestles with some real issues of confidence, in the most matter of fact way, and if “I Still Love Me” is perhaps the most Ryan Hamilton of them all, if you will, then its anthem to self love (“there’s nobody else I’d rather be”) is of personal significance.

“In Case Of Emergency” is perhaps the most emotionally charged. The battle with her own thoughts on a relationship gone bad, is laid out in explicit details here, which works brilliantly with the fragile backdrop of the piano.

“Magic Bullet” explodes into a big rock chorus, which is balanced by “Send Me Someone”, which is one that anyone who lies awake at 3am in the morning running the same things over and over will recognise instantly, as they will, most certainly, “Semi-Colon”, “there’s a semi colon drawn on my heart” she sings here, and doesn’t have the answers to the questions she’s posing. A thought underlined on the 60s tinged “Virtue Signals”, “facing up to the truth, is the hardest thing to do, so I left it at the bottom of my to-do list”, goes its first line. And yet, there is hope here. The keyboards of “Stopped Believing In You” have a real 80s school disco touch, but the words offer some light at the end of the tunnel, and the acceptance of “Let Gravity Win”, the dark humour with which she faces the aging process: “if you’re young and you’re slim, then just keep on swinging, cos one day gravity wins” suggests that after the catharsis, then the world will still turn.

Surely, though, there’s no point in having a Savage Purge if you are just going to remain the same. The ten songs here aren’t designed for children’s parties, but oddly they are uplifting. You can file it under “Uneasy Listening” if you like, but “Savage Purge” is a work of real skill and – if this doesn’t sound too incongruous – a real bleak beauty.