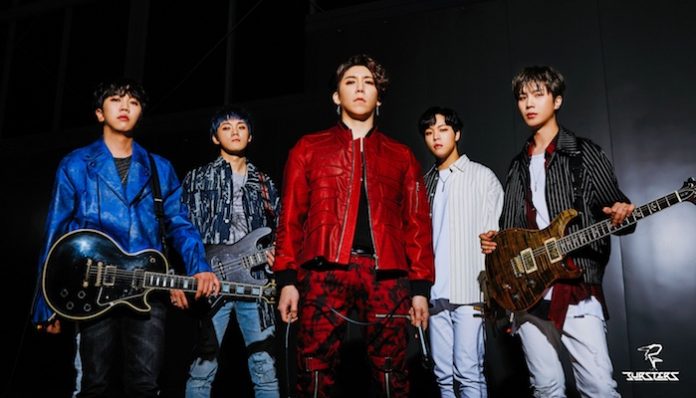 The group first appeared on South Korean television talent show series Superstar K6 in which the band finished in the top six as the first-ever heavy rock band in Superstar K6 to do so. The band is also the first Korean artist to have been included in the weekly radio playlist of the legendary British rock magazine, radio, and TV station Kerrang and are the first Korean Metal band to tour the UK on a five-date trek as part of their `K- Rock Revolution World Tour` in 2019.

The boys have a UK debut fourteen track album called “Once and for All” and having caught one of last year`s five live shows, I was quite looking forward to hearing this offering.

The album launches with the interestingly titled `Smell The Rot` and it`s a pretty up tempo piece, which has an almost orchestral musical opening, before the vocals are spat out come growled and shouted before reverting to a more lyrical tone with some really catchy melodies at the chorus of “Nobody cares, Willing to die for what” then entering into a real musical cacophony of noise with blistering guitar riffs, thumping bass lines, pounding drums and pleading vocals that come to a climax before almost fading out. I remember `Barriers` from the live show and it`s an anthemic quite imploring offering with its lyrics referring to discrimination. I have to say there`s plenty of variety with these fellas and `Hero` is at times an in your face, heads down speed metal freak out then it takes a bend in the road, to almost stop and reassess itself before heading back along the race track.

`Colours` is another anthemic song, a number that is meant for singing along to and comes before a quite curved ball offering `Once And For All` which is more of a poppy piece that has its rockier moments but seems to bounce along.  The vocals revert to Korean part way through, which does add a little to this piece.

`Dreamer` is a really atmospheric cut, which begins with twinkling piano keys before expanding out and having the words, “Beautiful World” being repeated throughout almost like a mantra. The follow on `Dreamer II` isn`t quite a reprise but again starts with some piano twinklings before becoming a more mid tempo offering with this time the mantra being “I`m Dreaming”

If ever a song was written to be performed in a stadium it`s `Remind You`, you can close your eyes and see those lighters and mobile phones being held up in the dimly lit arena as the song is shared. It even has a wonderful guitar solo towards the end. A U2 like riff opens up `Therapy` and that`s where the compassion ends as this tune heads more towards the kind of stuff Northern Ireland`s noise rock outfit Therapy? would perform. Another hint at the diversity and ability of this band not to be pigeonholed.

`Give And Take` is more of a new wave churning rock out, one that you`d sort of expect mid set of a live gig. I was reminded of the seventies band The Police. We revert back to an all-out assault with `Here I Am`, a mix of singing, screaming and growling to a melodic reasonably fast paced tune. It had some really infectious twin guitar playing in the latter stages the stuff that was a trademark of legends such as Thin Lizzy.

`Savage` probably needed a few more listens but was a thumping ride through a normal metal offering before bizarrely almost stopping halfway through to share a jazz like jam, ala Buddy Rich for about twenty-five seconds before reverting to type, perplexing and puzzling would be the understatement.

The penultimate track `Eternal` and final cut `Heal` are essentially love songs. The former starts as if it`s going to be an all out headbanger but it`s really a metal love song with some delightful guitar riffs allowing the vocals to ride atop. The latter is a stadium / amphitheatre aria. It has all you could want to get the faithful off their seats with bass and drums pumping, jangly guitars, heartfelt vocals and some “whoa woahs” to sing along to. All buttons pushed.

I have to say this album really delivered. The band Daegun Roh (vocals), Junyong Ahn (guitars), Gyejin Lee (guitars), Hwanhee Jo (bass) and Taehee Jo (drums) have been together for some time despite their youthful appearance and are an accomplished outfit. The album showcases a group who mix the very best of metal in an explosive way, which i`m sure is honed from their consistent touring across Korea and beyond. A superb debut that has a variety of styles of rock and shows a maturity beyond their years. Vive La K-Rock Revolution.

Previous article
HANDS OFF GRETEL TOUR OFF
Next article
BAND OF THE DAY: MONG TONG