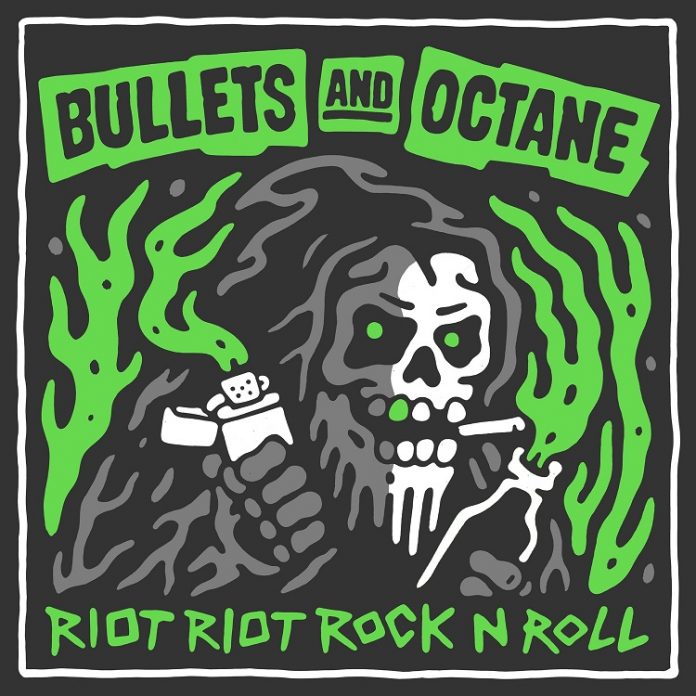 The Sunset Strip, that was the sound of the glam in 80s Los Angeles? That’s what the lazy biographies have you believe. The same ones who also pedal the narrative that the second that Kurt Cobain said “here we are now, entertain us” we all became grunge fans.

Those who love (note the present tense) that music, might have it slightly different. See, as much as I adore Poison, Cinderella and whoever else you want to name, there was a different sort of sleaze. The Cathouse had bands like Faster Pussycat (self-evidently since their singer was co-opener), Guns N Roses and a punk rock edge.

I know where Bullets And Octane belong. They are sleazy as all hell, but there’s no spandex here.

Put it this way. I own all the Poison albums there are to own, and nowhere, as far as I can remember does Brett Michaels sing: “slit my wrist, to ease my pain, but a motherfucking bullet through my goddamn brain….” Maybe it’s on a b-side to “Talk Dirty To Me”, I dunno.

That is the chorus to the last one on “Riot Riot Rock N Roll” but even the way the verses are delivered screams a band happy to embrace danger. Gene Louis spits the words like some MC not a rock singer, and manages to sound fresher than his competition.

To be fair, these days there isn’t much like this. There aren’t many bands that sound like they want to “Riot Riot Rock n Roll” like they do here. Possibly Warrior Soul, Kory Clarke could pull this off, so could Buckcherry, probably, but stop worrying and instead….like they say before the solo: “1,2,3 go!”

The first single, “Ain’t Gonna Be Your Dog”, was actually written with former Bucks man Keith Nelson, and it broods with an intent, like it’s just waiting for the chance to kick your head in, and to anyone who thinks music like “The Devil” doesn’t have the same “merit” as whatever po-faced nonsense you’ve got on, you’re wrong. Actually, you’re right, but the fact that Morrisey, Radiohead, whoever, wouldn’t go near this is to it’s credit.

Nope, this is escapism, nothing more, nothing less. And it’s particularly unapologetic about it too. Even the mid-paced ones like “Give Me Reason” contain the thought “I’m gonna be what I am till I am dead” and you can’t doubt them for a second.

What always set a certain breed of bands apart, if you like why GnR were always cooler than Def Leppard, was the violence, the nihilism. “As The Bombs Fall” surveys the apocalypse, and says “cool”, but does so with a harmony and melody too. It’s quite a feat.

“Chaos” is an interesting one, in that it takes probably the only deviation there is here. Starting off like a demented circus, it opens out into something which is closer to Gypsy Jazz, but then, the line, “the drugs I’ve taken are taking hold” probably explains what happened here.

This line up of the band is probably the best that Louis has got around him over the years, and Felipe Rodrigo in particular impresses with his lead guitar work, and also – thank the Lord (or the Devil, up to you) there are no ballads here.

“Rooftop Tears” dials it down a touch, but is built around Zachary Kibbee’s bass, and swings along a bit like 69 Eyes, certainly this is as goth as this gets.

Which brings us back to where we started, the end, of “Lost Crazy Psycho”, and its scattergun, casual suicidal violence, somehow it is the perfect end here. Given that it is shot through with the same palpable danger that rock n roll should always have.

I don’t know if they still have Parental Advisory stickers (and Christ, the amount of albums I bought in the 80s and 90s simply because they had one was huge!) but this would wear one proudly.

“Riot Riot Rock N Roll” first sounds exactly like you want an album with that title to sound, but more, it is the best album that Bullets And Octane have ever made.