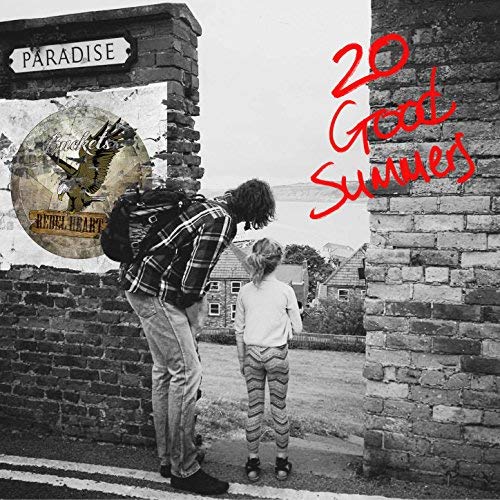 Picture the scene. It’s 8.30 on a Tuesday morning and you are driving to a job that you’ve done for so long you are probably stuck in a rut. You’re listening to a new album and feeling that usual melancholy as you pull up at the gates at your workplace. The song is rollicking along like some FM-style melodic rock tune and you’re enjoying it immensely.

Then this happens: The first line kicks in. “If you could see your future,” offers the singer. “would you change your past? Try a little harder to build a dream that lasts….” And you stop and think….

That….urmmm….may have happened to me last week. Whether that was the desired effect of “20 Good Summers” or Buckets Rebel Heart only Dave Colwell and Paul Edwards know, but the band is a collaboration between the two, who had worked together in groups like 720 and The Torpedoes.

Colwell, though, is perhaps most famous for his work in Humble Pie and Bad Company – and if you can imagine a crossover between the two bands, then you wouldn’t be too far away in your assessment of the sound here.

The one that got me thinking is “The Bridge” and in common with most of the work here it offers something distinct and different from the next cut, but whatever it does and wherever it goes, BRH manage to make it sound just perfect.

“Animal Beat” kicks in with a real groove, a sort of class that makes it seem easy – but then if it was, everyone would do it – and Colwell’s solo here is a real cracker too.

Much of the record concerns itself with the passing of time – the front cover is an old photograph for example – and the title track, which recalls a latter-day Thunder track, is another, but then, you only get “20 Good Summers” after all, so why bother with regrets? In that context, “maybe coulda done this, maybe coulda done that” is a key line here, you suspect.

“Rebel Heart” propels us straight into southern rock territory but on its own terms. Indeed, I can’t shake the thought that the opening lead is just like Guns N Roses version of “Knockin’ On Heavens Door”. The subject of wanderlust is a staple, the way this is done is not.

There is a real dirty groove about “Whiskeyland” and special mention must go here to singer Jim Stapley, who summons something akin to Paul Rodgers here. “Mexican Sun/El Diablo” slows the pace to wonderful effect, while Georgia Satellites’ Rick Richards turns up to sing lead on “Radio State Of Mind”. A patented GS- style rabble rouser, as well as being an acerbic put down of those who tell you how to make records – which wouldn’t do on an album as proudly independent as this one.

Richards is just one of a few special guests on this. Mollie Marriott appears on a few to offer her wonderful backing vocals, while Sam Tanner’s superb keyboards propel the gorgeous, bluesy ballad “When Angels Fall”.

“Bulletproof” is a stripped down, acoustic led affair, one that most Americana bands would kill for and which rather proves the depth of talent here, while the horn drenched “Customised Car” is like an updated version of Springsteen’s “Pink Cadillac” – and is the perfect, lets say, vehicle for an incredible performance on vocals from Lyla D’Souza, a woman who, on this evidence is gifted with the ability to make anything sound filthy.

“Faraway Blues” is dripping in organ and sounds perfect for late at night when you are feeling reflective, and it looks back one more time for “If You Need Me”, which is built around a piano lick and Stapley’s voice. It is but one more example of how many different strands this record has – and how they all work.

“20 Good Summers” is a brilliant record. Partly it recalls their past, but I’d argue though, that it does more than that. It proves beyond any doubt, actually, that rock n roll is going nowhere even in this modern age, as long as there are people like Buckets Rebel Heart,  with the talent to write songs as good, thought provoking and downright fun as these.