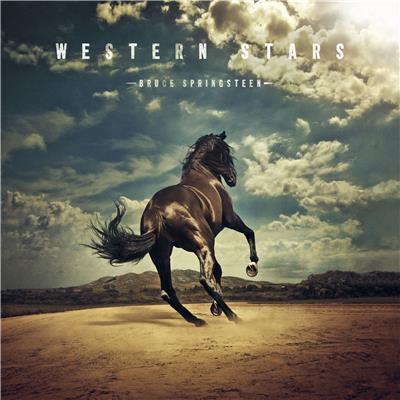 Last night on BBC Radio 4 there was a lovely piece about the Coach And Horses pub in London’s Soho. The den of inequity that has attracted many an artist through its doors, and inspired the work of Jeffery Bernard who chronicled the great and the good with such panache.

Something about Springsteen’s work that can be overlooked, perhaps, is just how fabulous his stories are. Never mind the songs, or the fact he can enthral in a stadium like no one on earth, for a second. The stories, the characters he weaves, the use of language is second to none.

It’s the universal nature he somehow manages to conjure that sets him apart. Listen to these 13 cuts – I suppose it is loosely a concept record based on a collection of people who wind up in the American heartland for their own reasons – and you will, if you’re honest, see yourself in at least one of them.

“Hitch Hikin’” cleverly and deftly starts it off. What the narrator – and that’s how this feels – is escaping from and where he is to end up is never told, but rather like the great writers, he observes. Looking at the people who his riding with and telling their tales.

Musically this is neither an E. St Band affair, nor a solo effort like “Nebraska” or “Devils And Dust.” Instead the music – in the case of “….Hikin’ a lush string bed – rather lets the words breathe, staying out of the way, almost.

“Wayfarer” deals with someone with a deep wanderlust. Almost acknowledging its ground he’s covered before, Springsteen utters the first line: “it’s the same sad story, love and glory”, but this is for those who want, something, anything else. “Some folks are inspired, sitting by the fire, slippers tucked under their bed” he sings, but the inference is clear, for some that will never be enough – hell, everything would never be enough.

“Tucson Train” is a catchy old thing. Someone waiting for love to arrive, but a little more than that, while the title track is sensational. Told through the eyes of a faded actor who is doing a commercial for Viagra, it has a similar vibe as something off his “Tunnel Of Love” record.

The themes are classic Bruce in truth. The Latin flavoured “Sleepy Joe’s Café” is the archetypal working-class fella who “comes down from the big town when the clock strikes five” to let his hair down, but he still finds a fresh way to say it. “Drive Fast (The Stuntman)” has a country tinge, but it is as stoic as it gets.

“Chasing Wild Horses”, one of the more gentle ones, sees a man look back on his life with plenty of regret, the tickling piano of “Sundown” adds an airy feel to that one, but the first line: “I am 25 hundred miles from where I want to be” casts the protagonist just as lost in the wilderness as anyone else this shines a light on.

“Somewhere North Of Nashville” which although it is less than two minutes is a real highlight. Sparse, almost desolate, it offers the thought: “I lie awake in the middle of the night, making a list of the things I didn’t do right….with you at the top of a long page filled…..” That might be the one I recognise myself in, but I wouldn’t like to comment……

“Stones” has a slightly more strident guitar – although there is nothing approaching a lead break here – “There Goes My Miracle” is unashamed pop music and if there was one this collection could do without its probably this one in honesty. “Hello Sunshine” is perhaps the most overtly country thing on offer. Certainly, I could draw a Glen Campbell parallel if I wanted to.

Although “Western Stars” has 13 songs on it, it isn’t the longest. It ends with the quite beautiful, evocative, “Moonlight Hotel” about a place “where nobody travels, nobody goes”, except these songs do.  Springsteen does. That’s why he’s the greatest songwriter there has ever been.

“Western Stars” has plenty of evidence for that too. There will be those who want to it compare to the “Glory Days” – literally and metaphorically – but I’d argue that is what those celebrations of rock n roll to 50,000 a night are for.

This contrasts with that other facet of The Boss totally. This doesn’t do bombast in any way – and in that regard is actually starkly contrasting with the last few that Springsteen has done – but the finest chronicler of the human condition we have, has released his best album in a long time here.