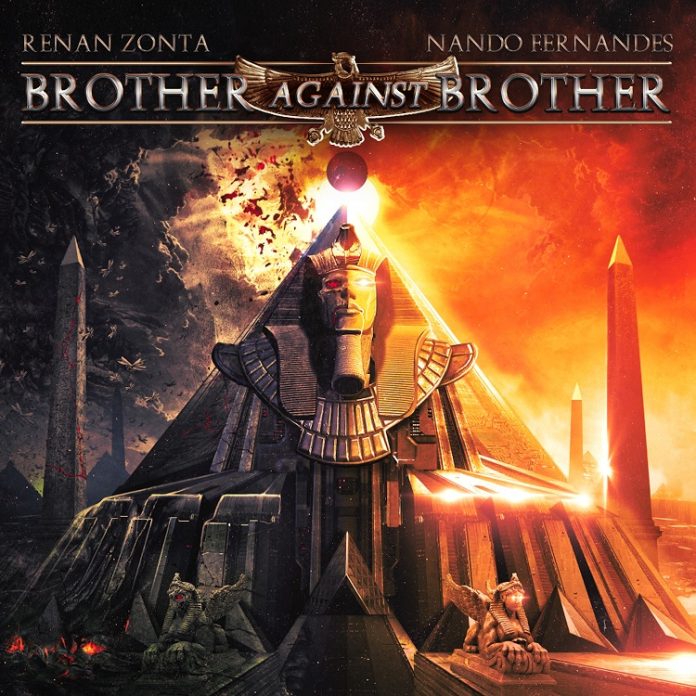 You have to love Frontiers Records. If ever there was a label that exemplified the spirit of “never mind asking why, ask why not” its them.

Time and time again, month after month (and they are good for about 14 releases a month, trust me!) you get an album that says “This is a project created, overseen and directed by Serafino Perugino President and A&R director of Frontiers Records, underneath the tracklisting. And as much as the label releases some fabulous conventional records (Wayward Sons etc etc ) you kind of get the feeling that these are the ones he enjoys – the ones where he can sit in Italy like some mad scientist (I like the thought of him in a lab-coat, the image pleases me) creating some alchemy.

That is Brother Against Brother, really. Or to be specific Renan Zonta (Electric Mob) plays Kane to Nando Fernandes’ (Sinistra) Abel.

The former is well liked on these pages. Indeed, in my review of EM’s album last year, I started by chirruping: “There’s only one place to start with Electric Mob. Their singer Renan Zonta. Good god, the lad can sing.”

And if I wasn’t as familiar with Fernandes, then the facts are still the same, the two of them are incredible.

The music is too  – and this is where Perugino always knows what to do – because from the opening grandiosity of “Two Brothers” onwards, this is essentially a lesson on how it is done.

The “it” is important too, given that Electric Mob are a kind of hard rock thing, I perhaps wasn’t expecting power metal pomp and ceremony and chest-beating that would make Russell Allen blush.

“What If” is more of the same – and in truth you can probably level that epithet at all of them – but it excels by dint of the talent on show. Not least of which is Alessandro Del Vecchio, who wrote this, played bass and keyboards and as he so often does on these releases, does it all with a seeming effortless ease.

Guitarist Jonas Hornqvist (a session legend) is brilliant here too, finding the right tone on “City Of Gold” which is epic in the way that Avantasia are epic, and so many more.

Mention of the greatest power metal band of them all – Avantasia – if I need to underline such things, is deliberate too, given that this record is of a similar ilk, even if “Heaven Sent” and the likes have a modern touch to go with the clear OTT intent.

“Haunted Heart”, built as it is around a keyboard riff, is more Battle Beast than Battle Metal, “Deadly Sins” adds even more layers on top, strings and all sorts, as if it was just seeing if it dared and “In The Name Of Life” strips down a little, driven as it is by its acoustics, but it still sounds overblown.

There’s a kind of ominous, prog feel to “Demons In My Head”, and on album where the tracks feel as if they should be labyrinthian and Dream Theater-esque in length, the Eastern tinged “Whispers In Darkness” is actually the only one that tops six minutes.

The way that Zonta and Fernandes mesh is astonishing, frankly. “Valley Of The Kings” might have drummer Michele Sanna as best supporting actor, is it were, but it’s the two Brazilians that are in the spotlight throughout.

There are moments of genuine heaviness here, “Lost Son” for example is a proper metal gallop, and as much as this is rooted in power metal (the sort of leather clad thing that someone who doesn’t like metal think it all sounds like) “Brother Against Brother” is more colourful and better thought out than that.

The same goes for the band of the same name. Argue about what it is all you like, but when you’ve finished, all that matters is it is a fantastic record.