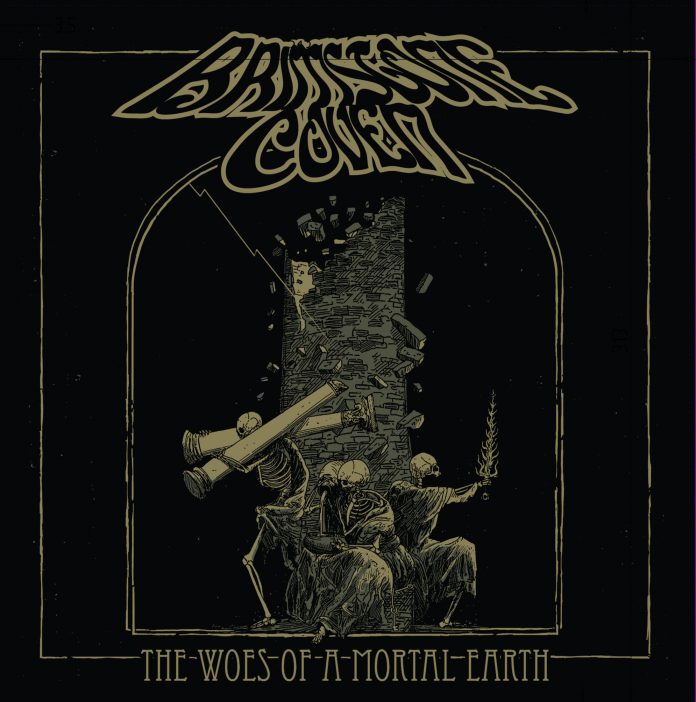 It’s not plagiarism if you copy your own review, is it? I am asking for a friend, obviously.

The reason for the question is simple. Back in 2016, I reviewed a record called Black Magic by an Ohio band called Brimstone Coven, and on the old website design I had back then I had a sub headline under the main one.  This one said simply: It’s occult and its doom, but not as we know it.

Now, its four years later and those words still fit. Up to a point, anyway.

By and large, that epithet still applies, to “The Woes Of Mortal Earth”, but there’s been a lot of water under a lot of bridges since the “…Magic” days (not least they released a record in 2018 that appears to have totally passed me by).

Mainly, though, they are now a three piece with founder member Cory Roth taking over vocals and Dave Trik behind the kit, but whilst there’s always something wonderful about a trio, the sonic effect of all this isn’t too huge.

The reason for that is Roth is a bit of king when it comes to riffs. Indeed, if I may be so bold, one listen to about the first 30 seconds of the opener here “The Inferno” may well tell you whether you are going to like this or not.

Thick, Sabbath-like grooves, a brilliant lead, full of fuzzed up glory, and vocals that sound like a spell is being created. They are all here.

Then there’s the lyrics: “cast your soul eternal, into the inferno” is a decent signpost too, and the other five don’t deviate from this kind of deviance much.

That all being said, this is a more fully formed album, perhaps than they did before. “When The World Is Gone” takes its cues from bands like Iron Butterfly, but there’s a real skill to how this builds and broods.

It does heavy too, but it’s the sort of heavy that is accessible, “Live With A Ghost” is heavy rock, pretty much exactly as bands like Budgie and the other proto metal bands did it.

Not that you could call this “metal” as such either. At least not as I view that word. It is just too bewitching to beat its chest with bombast, but it is so beguiling that it sucks you into its web.

You couldn’t say it was “modern” either. Even though “The Darker Half” has a chunky kind of swing about it, and the way the vocals are delivered has just a hint of Alice In Chains (as incongruous as that sounds, they really do). No, rather like “Secrets Of The Earth” (which ushers itself in on a huge bass groove from Andrew D’Cagna (who shares vocal duties with Roth), which brings to mind Steve Harris at his most “prog” if you will, they are proudly belonging to a world unhurried and untroubled by 21st century trends.

Most of the tracks are long, labyrinthian affairs – even if they aren’t “epic” in the conventional sense, but the last one “Song Of The Whippoorwill” is the most involved, and is anything but sweet, despite the nature it invokes.

In a way that is perfect for Brimstone Coven, as they kind of lurk, unseen, ready to strike. Plus despite the appearance, there is a gentle, pure nature to “The Woes Of Mortal Earth” and a clarity of vision for the throwback feel to the sound.

A gem that is perhaps waiting to be fully discovered, Brimstone Coven are a special band.