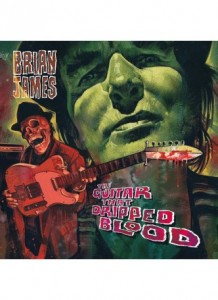 Brian James, a man who needs no introduction amongst the punk fraternity, he, along with his rabble-rousing cohorts in The Damned forged a path of punk that has inspired and given a career to thousands of imitators.  The first two Damned albums, of which james played the defining role, are the benchmark by which the following years were measured.

Last time out James was in a reflective and stripped down mood. This time he is back to the balls-to-the-walls punk that made him his name. The guitar that dripped blood belongs to Brian James and I would guess from listening to this album that the other instruments may be in need of patching up also.

From the off the re-recorded opening track “Becoming A Nuisance” gives us the first splatters of red as a fuzzed-up high octane James roars through four minutes of Damned-like intensity and raw power. Former Dead Boy Cheetah Chrome joins the party and injects his own six-string skills to great effect. You could swear you were back in ’76. The Lustkillers  Adam Becvare also is a frequent contributor across the album and his abilities do not go under used.

“The Regulator” follows and the quality setting remains at the highest level. Throughout the course of the ten tracks on offer the gauge never flickers never mind drop down. There are occasions when a more laconic atmosphere is called for and these moments are supplied by “When The Rains Come” with its slow and steady riffing and wailing telecaster tricks.

“Hindsight” kicks several kinds of ass and comes across like the MC5 in a bar-room brawl. Whilst “Baby She Crazy” stomps and hollers through two minutes of pure punk perfection.

The blood flows through the gritty and sleazy guitar and forms a puddle of blood at the foot of our protagonist. Those in favour of a more cleaner cut punk sound, mentioning no names, might be in favour of washing the blood away and replacing it with a smoother surface. James prefers to stand in the middle of it and play until there is no more blood to be dripped either from himself or his guitar.

If he’s not turning back the clock then he has definitely taken the batteries out because this is full-on raw punk rock that makes time stand still for the forty minutes of run time.. The spirit of ’76 is still very much alive and whilst trying to recreate it would be a pointless endeavour James shows that you can still summon up those feelings from 40 years ago and let them bleed all over you.