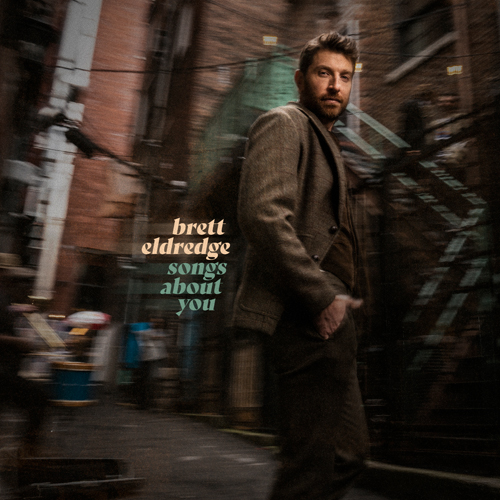 There’s an episode of Frasier (the greatest comedy ever made, I’ll broker no argument on the subject) where he pops to a cabin for relaxation and gets confronted by every woman he’s ever known.

I was driving to work yesterday morning and saw a girl that somewhere between 1996-99 I had the world’s greatest unrequited love affair with. There was only three things for it.

Which is where Brett Eldredge “Songs About You” comes in. See, if you ever want a lesson on why music is a universal language, then I give you this:

“I was picking up a bottle

At the neighborhood store

But heard I Can’t Make You Love Me

And I ’bout ran back out the door”

From the title track of his new one. That, right there, is why Eldredge packs venues everywhere in the world. Blokes everywhere (it might be women too, but I suspect its mostly blokes) have got these songs. The ones where she’s “suddenly beautiful”, where “this is a song about….” and “I’m wrong, I’m wrong, this ain’t a love song”. The songs that transport you back 25 years.

Therapy? Who needs it?

Elsewhere, “…..You” is more soul fuelled than usual Eldredge stuff. “Can’t Keep Up” struts its funky stuff, horn drenched and partying, and “I Feel Fine” is darker, bluesier, and more menacing.

It feels like he’s ready to take more chances, perhaps than normal, and even the gorgeous piano-based ballad is from a different place.

“Hideaway” is acoustic, from the dirt roads but wants to leave them behind, and there aren’t many break-up songs from country artists that revel in kicking her out of the door. “Get Out Of My House” does that. Furthermore it suggests that his mates couldn’t stand her and luxuriates in the glorious line “you started changing furniture, you started changing me.” For that alone it deserves a Grammy.

“Home Sweet Love” is more conventional. Pop music, it’s the sound of summer proms, that’s fine, but somehow the album is better when it does things like “Want That Back”, which does the cliches about small town America without doing them, somehow.

“Wait Up For Me”, belies its gentle intent by being essentially a booty call set to music (he can dress it up as a love song if he wants to, but it isn’t). “Where Do I Sign” has the air of a 1950s school dance, and if “Holy Water” is Gospel tinged, then its done well.

The record ends with the folk flavoured calmness of “Where The Light Meets The Sea” but a listen to the lyrics reveals that the protagonist is off, looking for something new – and that’s basically the album too.

Ultimately whatever Brett Eldredge does sells. “Songs About You” has been out 10 days or so and is already counting its streams in the tens of millions, that all being said, it deserves it, and is not merely an exercise in giving the public what it wants.