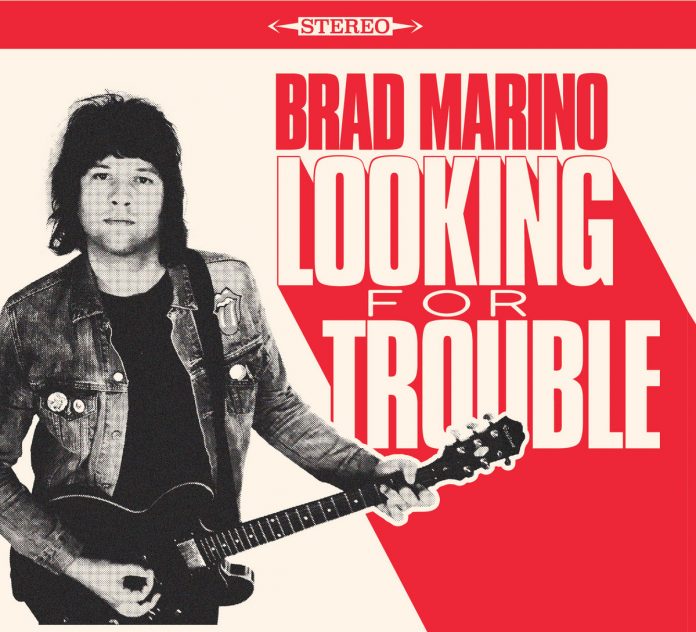 Here’s a fact for ya.

MV was not originally going to be called Maximum Volume at all.

It was originally going to be called Upto11. And I think I still own the domain name for that, before what happened was simple.

I was playing “Let It Bleed” on my crappy turntable and turned the sound up. “Max Vol” it said on the display, and that was that.

I purchased two domain names that night. Maximum Volume Music and Maximum Volume Metal. The reason I went with the former was the “metal” thing was too restrictive, and well, to be honest, aside from the “classic metal bands, the older I get I can take or leave most of it.  What I love, what I adore, what I still listen to at Maximum Volume – in all senses here – is rock n roll.

Which brings us neatly to “Looking For Trouble” – the second solo album by Brad Marino. The story of how I came to love Brad is in other reviews, this time though, all that needs saying is this: There’s a song on here called “Taillights Fade”. And if a song better invokes the spirit of rock n roll, the idea of the freedom, the rebellion, in 2021, please can someone send me the thing. Put simply, this should play when a Hells Angel rides his Harley into hell, with his helmet on fire. Or something.

If that’s the highlight of this (it is) then lets not kid ourselves, the rest of it is made by a genius too.

“Even The Score” is so full of low-slung guitar that Keith Richards is considering retirement, while the title track borrows from the great Dan Baird – a hero round these parts – as well as discussing those that love to stick their nose in to your business. And if I’ve got someone in mind, then so do you. That’s the point. So had Brad, probably.

“Local Show” (pay off line, “which means nobody will go”) features the superb Kurt Baker (Marino plays all other instruments here except drums) and wonderfully sends up the pitfalls of being a touring band.

Throughout his career Marino has proved his gift for melody and crunch. The harmonies on “Something For Nothing” are the sound of sunshine, and “Tripwire” adds a kind of surf rock. The type you’d imagine to be in a Tarantino Film while Michael Madsen does something pretty violent. “Take Your Time”, by contrast, is happy to be a 60s pop song – a trick “Fell In Love Again” enjoys so much it does it again.

Scratch the surface anywhere here, though and you’ll find punk. “What Do You Know?” brings it more to the fore, perhaps, but its there, everywhere. The spirit of The Ramones is all the way through “To Bleed” as it is the others too.

The other pair of songs came out on an EP last year. “False Alarm” would in ordinary circumstances, be the best thing here (but as we’ve discussed….) and “At Night” is equally mighty.

“Looking For Trouble” though, is 12 songs, 32 minutes of a rock n roll explosion that proves beyond doubt, that Brad Marino is the master of the two to three minutes rock n roll song. There’s no one better. So you’d best turn it up to 11…