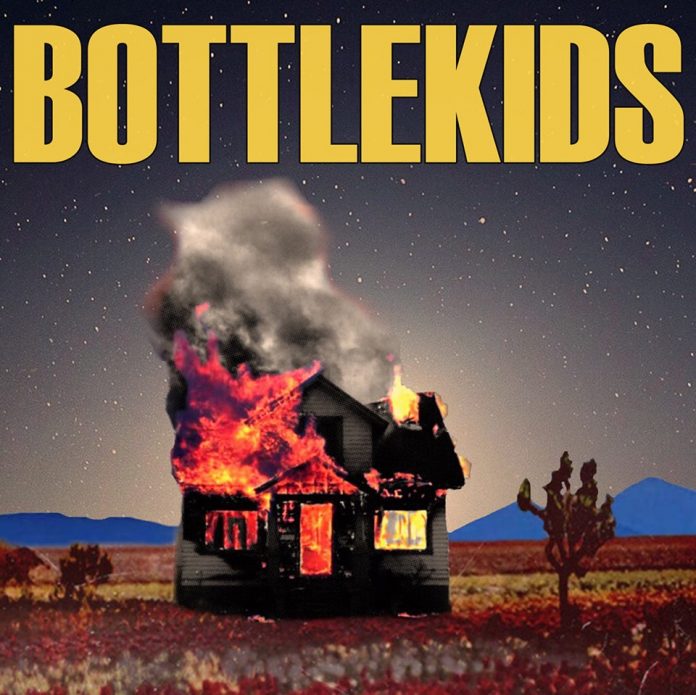 Often when I start to think about reviewing something, I start with a word or a phrase that sums whatever it is up to me.

There is only one for Bottlekids.

That’s it. Dress it up how you want and whatever this does, it sounds like it is simply happy to be out of the house.

A four track EP from a new band from Wales, and again, when I review EP’s of this length – about 12 minutes is all this needs to be done and dusted – I start to hark back to the 90s. To a time when every lunchtime I had at the couple of jobs I had in that period was spent seeking out CD singles (we still had proper record shops then, it was ace.)

There is more reason than normal for that with Bottlekids to be honest. Because it sounds exactly like the stuff I was buying back then.

I’ll swear there’s been a 90s revival that no one told me about. I’ve seen bands like Therapy?, Terrorvision and Dodgy recently, Dinosaur Pile Up have nailed the sound and there’s kids of about 12 walking around with Nirvana tops on.

The opener “25 Days” sounds somewhere between Blink 182 jamming with Lit and about a million other bands I can remember, like B Movie Heroes and Co.uk. The point is though, really that none of the comparisons matter.

Bottlekids are out there doing this for themselves. The absolute pick of them is the brilliant “Smokes, Lets Go” which is sort of like Gaslight Anthem doing things with a lip curl of The Jam.

Crunch and cool abounds here, but more than anything so does fun. Their Facebook page offers no other information than “A Band From Chepstow” together with a picture that suggests they drank Chepstow dry while making it (and using Romesh Dodangoda – Motorhead and about a million others – is always a guarantee of quality).

“Dark Times” has a chopping bass, is a little slower but crikey its catchy, while “The Wayside” is just glorious. 3 Colours Red, Honeycrack and even indie stuff like The Libertines are all references here, but that’s my past. Not Bottlekids. They are just doing this because they want to. As Billie Piper might have put it.

“The Wayside” is a warning too. So many of those great bands fell by it over the years. Who knows where Bottlekids will end up? But this is a hell of a start.

Previous article
BAND OF THE DAY: WACO
Next article
BURSTERS @ THE MILL, BIRMINGHAM 16/07/2019