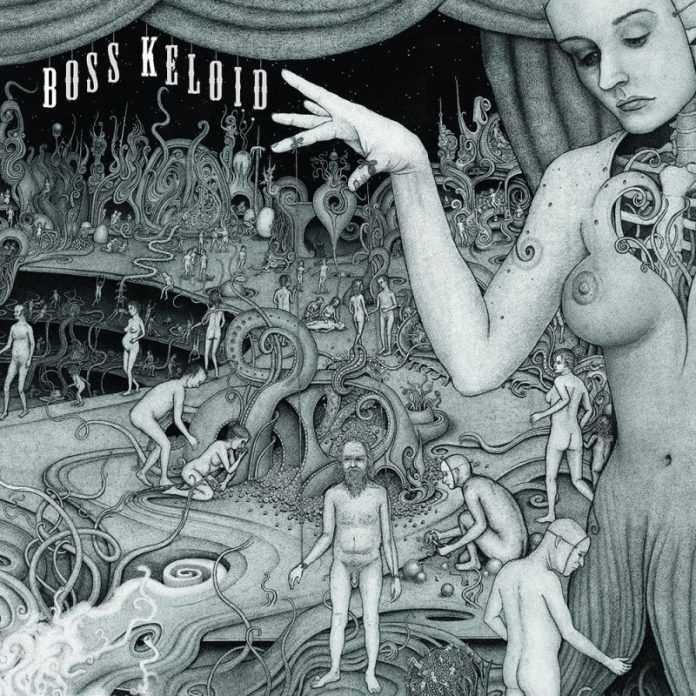 From Wigan to the world with album number two

We’ve written before on MV about the wonderful names that PR people give to musical genres. This one, to be fair, might be the best of the lot. The stuff that came with this album from Boss Keloid would have you believe that the Wigan four piece deal in bi-polar core.

Which is magnificent, and even more insanely, makes perfect sense when you actually listen to the damn record.

Some facts might help. First, this is their second record and it was recorded at Skyhammer Studios by Chris Fielding of Conan. It also features Conan frontman Jon Davis on a couple of tracks and was mastered by the chap that makes their records sound the way they do, and finally it appears on Davis’ Black Bow Records label.

It wasn’t really ever going to sound like the Beach Boys was it?

What it actually is, though, is only partly told by its support cast, because the four men who play it have managed to take sludge and do something rather fresh and exciting with it.

The scope of “Herb Your Enthusiasm” (which is surely one of the finest album titles known to man?) is breathtakingly massive. Opening piece – you hesitate to call them songs, because they aren’t in the conventional sense – “Lung Mountain” features mammoth riffs, lilting quiet moments some doomy references and a shit load of droning sludge. That it – like the rest of the record – uses exclusively clean vocals is another key difference from the norm. Indeed, it’s companion piece, “Lung Valley” simmers rather then boils as singer Adam Hurst” underplays the bombast and ford for melody. Even here, though, there’s a sense of wilfulness as if the track will go off to its own tangents at a moments notice.

In truth, there’s little of the rulebook about anything the four piece do. “Haarlem Struggle” hides it’s progressive clothing under a cloak of doom, and “Escapegoat” has a great big, thick riff, courtesy of Paul Swarbrick on guitar and Adam Swarbrick on bass, who both do a fine job throughout the collection.

“Cone” has a trippy, claustrophobic feel, while “Axis Of Green” is an exercise in exploration and where in other hands “Elegant Odyssey” could have been a discordant mish-mash, here it is a pummelling, crushing high point.

“Chabal” is arguably the most linear song here, and probably one of the heaviest too – and as it comes near the end, you are used to twists and turns. Even allowing for that, though, the closing nine minute long beast of “Hot Priest” is something from the outer reaches, and merges with the extremely heavy with the gloriously psychedelic to leave no one in any doubt that Boss Keloid don’t do things by halves.

Ultimately those looking for verse-chorus-verse style easy listening or songs they can sing in the shower can look elsewhere. Boss Keloid thank you for your interest and wish you all the best. Those who fancy investing some time in something genuinely different, frequently challenging but always compelling are welcome to leave their pre-conceptions at the door. Bi-polar core never sounded quite so good.