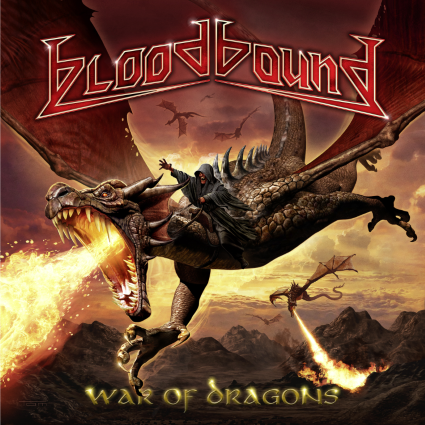 These are boom times for bombastic, Euro power metal.

In recent months, we’ve reviewed plenty of it on these pages and it has been uniformly excellent.

Last year, Sweden’s Bloodbound came over to these shores with their countrymen – and arguably the kings of such things – Sabaton. Opening on a three band bill that also included everyone’s favourite pirate loons, Alestorm, they cheerfully showed everyone they belonged.

Now, they follow up 2014’s “Stormborn” with “War Of Dragons” and in the process lay down a marker that they might just be the true keepers of the Trad Power Metal flame.

In many ways this is just the natural continuation of “Stormborn” and within about 15 seconds of its first proper song, “Battle In The Sky” you will know whether you like it or not. Or to be accurate, whether you get it or not.

That’s because in many ways reviewing a power metal record is pointless. Those who love the idea that bombast is turned up to 11 and the whole thing works on the premise that if less is most definitely not more, will absolutely love this.

The riffs are huge, the drums could move mountains, the keyboards parp in the way the Europe would if only they let themselves really go – and that’s just the ballads.

Elsewhere “Tears Of A Dragonheart” (no, we are not making this up) is a tour de force. The title track benefits – like most do actually from backing vocals that are so big it verges on the ridiculous, but by the time the solo has kicked in, then your fist is pumping.

Best of all, perhaps, is “Silver Wings” which outdoes Avantasia in terms of size. If Sweden hasn’t picked its Eurovision Song Contest entry yet, then we’ll nominate this on their behalf. “Stand And Fight” (with swords, obviously) seethes at something – Dragon’s probably – but is superb, “King Of Swords” is the heaviest and most metal song here, which for the avoidance of doubt makes it very metal indeed and it’s chorus is one to make Daragonforce jealous.

There is nothing here that could be described as stripped down. Nothing here even wants to be talked about in those terms. Instead it wants to stride the earth like some colossus and lay waste to everything in its path. That’s exactly what “Fallen Heroes” does and “Guardians At Heaven’s Gate” reckons the whole thing is so much fun it does it again. Just faster.

“Symphony Santana” has a go at being a little more orchestral until it realises that drums only work at 100mph, and “Starfall” has a darker guitar line, but the same breakneck speed as the rest, and as “Dragons Are Forever” finishes this up, it is tempting to imagine this as the soundtrack to some episode of Game Of Thrones that is a damn sight more fun than the actual series is.

You can only suppose that even Bloodbound understand that basically “War Of Dragons” is ludicrous. But the glory of Power Metal as a whole and this record in particular is that everyone is in on the joke and no one is too po-faced about it.

But then, even if someone, somewhere takes it seriously this is still wonderful.