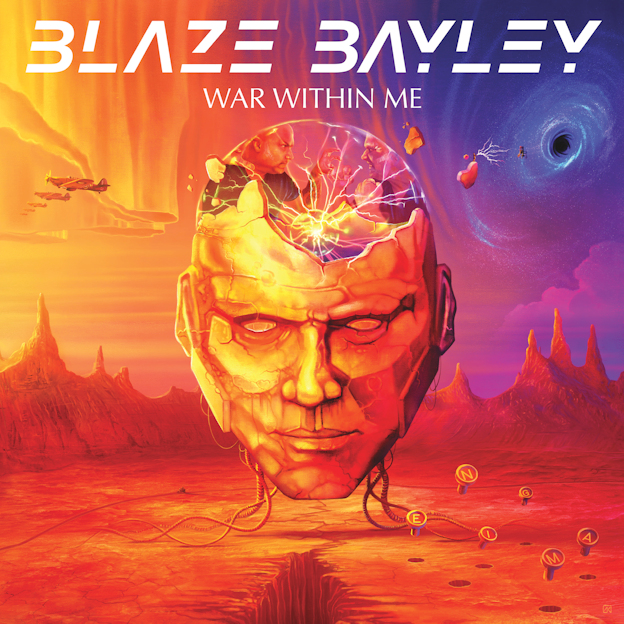 “War Within Me” is Blaze Bayley’s 11th album. It’s worth pointing that out, if only because he has – over the course of the last 21 years – it seems to me, been defined by the words “former Iron Maiden Frontman”, when in truth, there’s not been 11 metal albums as consistent as the ones that Blaze has made.

Bayley is a personal favourite of mine. As I try and say – by way of thanks – whenever I review him, the first gig I ever saw was Wolfsbane at Tressine’s Rock Club in Birmingham, as they did a matinee set for us kids in the summer of 1991, and I’ve supported him as a fan ever since and goodness, how he’s rewarded us all.

This one is another from the (extremely fertile) chapter of his career that has seen him effectively use Absolva as his band. The Mancunian’s brilliant guitarist/writer/producer Chris Appleton co-writes these 10 tracks and he and Bayley are a mighty team. Blaze understands metal and Appleton understands Blaze’s voice and there’s a tremendous chemistry.

The title track is BB in a nutshell, its brilliant. Its slightly OTT and made by metal fans, for metal fans. Simple as that.

The subject matter for this one is particularly interesting though. After the last three were a concept album trilogy, this one returns to “reality”. “303” is a homage to the Polish pilots of WW2 (it even sounds like Sabaton!) and “Warrior” does the familiar starts quiet, does a gallop thing that Maiden do (and as a further aside I am on a mission to get the two albums Blaze made with the Irons recognised as crackers).

A regular theme for Bayley (who is honest about his struggles) has been to take control of your own destiny. “Pull Yourself Up” treads that path again, and feels like a personal one. “Witches Night” is a perfect example of how to do metal in a classic way, but to still make it sound modern. Power metal bands the world over should listen to it.

“18 Flights” is the centrepiece, it feels. Think a kind of “Smoke On The Water” in which our heroes get caught in an earthquake when they are playing. And you know what? There’s nothing more uplifting than a Blaze Bayley gig.

After that, there’s a kind of trilogy. And this being what it is, its interesting too. “The Dream of Alan Turing”, “The Power of Nikola Tesla” and “The Unstoppable Stephen Hawking” (and Maiden comparisons with the latter are frankly unavoidable) are distinct songs, but they feel like a collective, feel like a “suite” and viewed in that way, they are as ambitious as they are classy.

As he often does, the record ends with a ballad. “Every Storm Ends” contains a message. Overcoming adversity, it seems to say, is always possible. And if ever there is one who knows then its this man. It kind of slips under the radar, just a little, that as good as his other bands were, it is right here, right now, where he is making the best music of his career. “War Within Me” merely reinforces that view.

Previous article
HOLDING OUT FOR A HYRO
Next article
BAND OF THE DAY: CRUZH