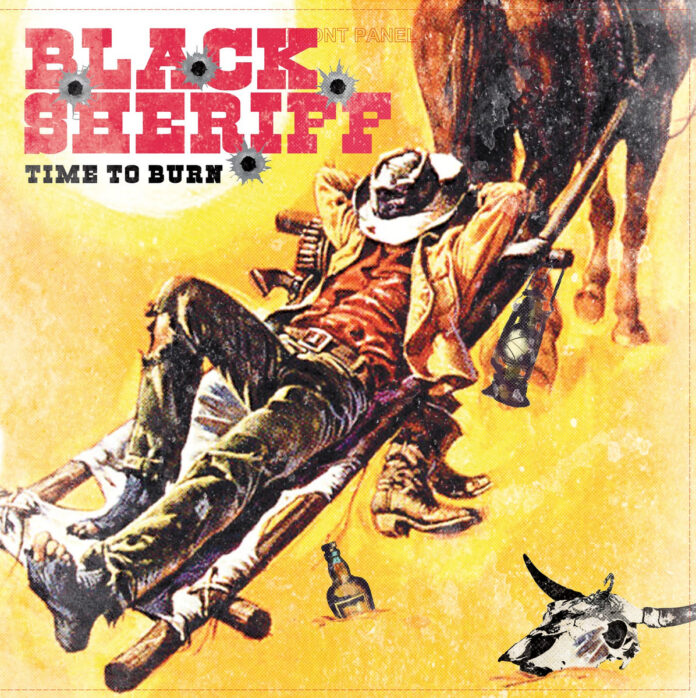 I know its immature, it really is. But whenever they say on a sporting event that’s being televised “apologies if you heard any industrial language”, I always get really annoyed when I haven’t heard it.

Likewise, when I was a kid, if the “Parental Advisory” sticker was on the front of an album, we’d probably by it. And I don’t think rock n roll will ever reach the same level of danger as it did the day GnR sang “I see you standing there, you think you’re so cool….” On “It’s So Easy”.

Credit, then to Black Sherriff. They’ve come all the way from Cologne to party harder than your average piece of Tory scum in the Number 10 garden in a lockdown. Even more kudos that of all the songs that have the E for explicit on Spotify’s version of “Time To Burn”, that the cover of “Hüsker Dü’s” “Diane” is not one. Which considering its subject matter makes you think about the skewed priorities of what we think acceptable language, really.

The album as a whole is nasty, grimy, oily and even better resolutely unashamed. A bit like the cover of “Centerfold” from an EP series that I reviewed in the summer, only with more intent.

“No, No No” thunders like its stole money from the Hells Angels and is fleeing the scene, “Love Exorcist” is probably not worth a deep analysis, I mean, if you want to shag a demon then hats off and we’ve all been there. What I will say though, is that is thoroughly fun punk n roll.

Christ almighty, these boys even make the aforementioned “Diane” sound like it’s a night out with The Hellacopters, and if I was sort of hoping that “Supersonic” would be a cover of Oasis, then it sounds a bit like something with the hunger from Maiden’s first album and the energy of the “action rock” brigade. Thinking about it, anyone asking for a “gin and tonic” here, might get thrown out of the band.

“Dance, Dance, Dance”  – don’t worry, its not for the “Strictly” mob, its strictly for strip clubs – riffs and rips out leads all over the shop, while “Generator” might change vibe a bit, with something a bit more electronic and stomping about, but there’s still the gang vibe. There’s even a bit of ZZ Top in the chorus, so that’s cool.

“Drinking Out Loud” and “Get Drunk Tonight” are essentially the same song. Ok, the former might be a bit of power pop, and the latter pure rock n roll, but basically, cheers. More cheers than “Kilslayer Bob” anyway, which rather more matter of factly than you might think does a bit of serial killing – and by the way, sounds like the Beach Boys. For once, I am not joking.

“Happy Camper” underlines the idea that if you don’t like Johnny Cash, the problem is with you, while “Black Angel” ends the record in what, I guess, we can call trademark fashion. Slightly violently, slightly nihilistically and without a care in the world as long as the music is loud and the drinks are flowing.

The Black Sheriff tag line on their Google search is simple: who said rock n roll is dead? While their bandcamp proclaims: “Songs about drinking, partying and killing “Time To Burn” is the perfect soundtrack to a wild, hard rocking weekend.” Look I am not going to lie, I probably won’t be doing anything on that list this weekend, but I do agree that the album is ace.