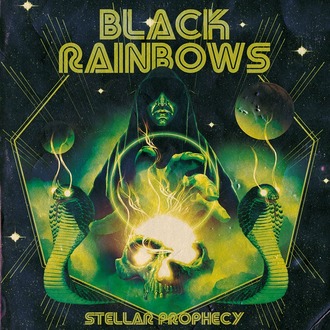 In their nine years on this planet Rome’s Black Rainbows have managed to impress just about everybody by being rather good, and now they are back with album number five.

There’s a problem, though and it’s this: MV on this occasion isn’t necessary, because we could write 500 words on this wonderful seven track record and it still wouldn’t sum the band up as well as the blurb that accompanied this release: “Blending the drive and swagger of 70’s hard rock with the sun-baked thickness of 90’s stoner rock,” it said. “BLACK RAINBOWS have managed to create their own sound imprint.” Shit. What are we supposed to say to add to that?

All we’ve got, to be honest, is this: From the thumping riffery of “Electrify” through to the the psychedelica of “The Travel” that concludes things here, there is absolutely no let up in quality and absolutely nothing not to enjoy.

Whether it’s the stoner rock of “Woman” with all its 1970s intentions – and use of cowbell to get MVM bonus points – or the short and sweet boot to the balls that is “Evil Snake” which seems intent on packing as much fuzzy swirl as it can manage into three and a half minutes, or the insanely catchy “Time To Die” – a song so good that Mos Generator would be proud to call it their own – it’s all shot through with a class, but moreover a total mastery of the craft.

Best of all, though, is “Keep The Secret” which is a five minute lesson in urgency and perfection, and when they fancy being acid drenched and trippy, Black Rainbows have that nailed too, as the 12 minute labyrinthine journey through “Golden Widow” is all too willing to show, and if the aforementioned “The Travel” is a mere baby at just shy of ten minutes, then it arguably takes more twists and turns along its way.

All of which adds up to a very special collection indeed, and further proof that Heavy Psych records – who have already brought us the Banquet and Duel records this year – are the purveyors of some of the finest music on the planet right now.

As for the band, they move onto their next decade with a career high in their bag – what else that bag is full of, you are probably best not to ask, and they may want to keep it away from customs – the rest of us can turn it on and enjoy the errrmmm, trip, cos there’s gold at the end of this Black Rainbow for sure.