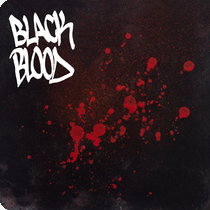 Stoner from Finland that wants to fight.

The name – it came from a GWAR song by the way – might indicate that this is a death metal record. It takes about five seconds of the opener “Clarity” to give the game away that it’s not.

Rather “Black Blood” – the album – which Black Blood – the band – claim came about as a result of the dark winters in their Homeland of Finland leaving them with nothing better to do, is the product of men that a) listened to a lot of Down, Orange Goblin and Corrosion Of Conformity records and b) are, sonically at least, so aggressive they probably fought each other while making the thing. In fact, so scared are we at the prospect of annoying them still further we don’t even take them to task over their assertion on the press release which accompanied this record that Finland was the home of metal……

Y’see there’s more to the likes of “Shrine Of Vanity” than thick and downtuned riffs (although trust us they are here and they are absolutely massive slabs of sound) but there’s something else. And it’s that Black Blood think they are a thrash band. The type of band that would kick you in the balls for fun and then glass your puppy on its way out of the room just to top it off, songs like “The Failure” aren’t going to die wondering.

And like a boot to the nuts this debut is absolutely, resolutely simple and extremely effective. If you call a song “Violence Is Golden” and start it with your vocalist screaming “fuck!” For no discernible reason, then the damn thing had better sound like this one does here. Speaking of simple. “Running With Scissors” might be full of childlike glee were it not for the fact that during the course of it, the track decides that “you wish you were born dead” and it’s last line suggests that it “wants you fucking dead”.

It says much for this record that even what is ostensibly it’s ballad “Stray Bullets” is full to bursting point of hatred. Heikki Rautava, does a manful job with vocals throughout, on this one he sounds like he’s gargling razor blades with a ginger chaser, but it, like the southern tinged instrumental “Route 66.6” provides a valuable counterbalance. Either way it’s soon back to business, and the marvellously titled “Dopesmashed Jazz” with all its Pantera-isms ushers itself on the mightiest of grooves.

Therein actually, is what’s so very, very good about this record. You sense that it’s the only one these four could have made. You also sense that Jukka-Pekka Lappalainen is a very good guitarist indeed, capable of rare melody in what ordinarily would just be monolithic riffs. Such a feel is why tracks like “Transfusion” are such a treat, and when it settles, a little like “Paradise City”, albeit in a totally different context, for cutting lose in its last minute, it really is the best of the 12 songs here.

Not for the faint of heart, or for that matter the easily offended, Black Blood provide what can best be described as the soundtrack to a bar fight in a real backstreet strip club.