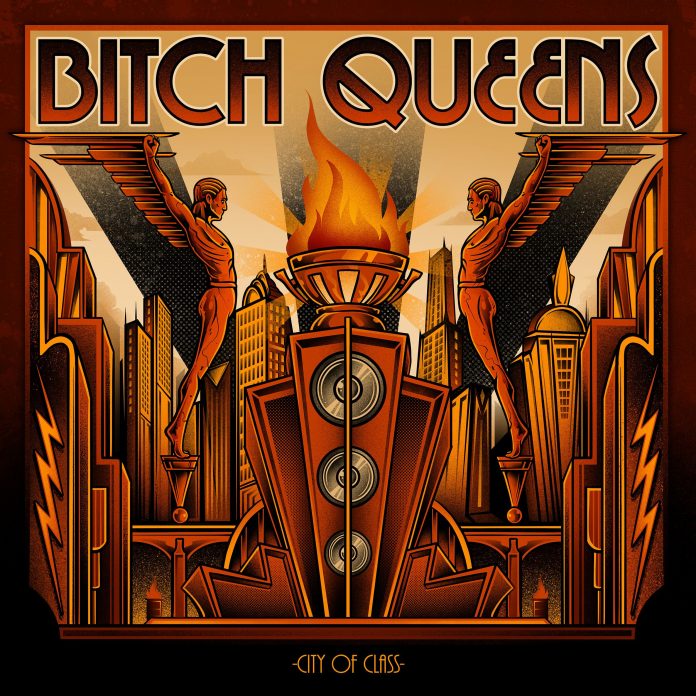 Whether you like Bitch Queens, I am going to guess, is basically dependent on whether you think you could get on bored with this from “Superboy”. The first verse on track three of their sixth record contains this as an observation. “look ye, look up there, is it a bird, or is it a plane, or is it just a boy tripping his balls off on cocaine?”

If at this point you are thinking, “yeah, this is the type of rock n roll I can get on board with!” Then The Bitch Queens welcome you, if not, that’s cool, BQ HQ thanks you for your interest you all the best for the future.

The title track which helpfully points out that “this city’s darkest corner is my shiny white ass” before rhyming “Punk Rock” with “Rich Cock” you know, just cos, is a decent starting point.

“Vote For Pedro” is 1 minute 52 seconds of denim clad nihilism. If you don’t like bad language then skip the track – in fact skip the record come to think of it – and “Especially Danny” is as utterly glorious as is ludicrous. An ode to their own Daniel Schönenberger – the bands guitarist, he has “the moves and the fanny,” apparently. If you are of the same persuasion as me (or Beavis and Butthead, either is cool) you will be sniggering along.

And more importantly singing along too, because whatever else Bitch Queens are, they are exceptionally good at writing catchy rock n roll anthems. Ok, they aren’t conventional anthems, but go with it.

“Sucker For The Blues” has grooves and a harmony, “Negative Heaven” is exactly what punk rock should be, and any song that contains the line “I am negative in my wet dreams” has a kind of genius. A twisted kind, but a kind nonetheless.

“When Did I Die” is probably the best of the lot. Shiny glam rock but wrapped in a knuckle duster and if you have made it this far through the record, you will have the hook in your head from the off.

“All My Money” is done at breakneck speed, like some Trash band playing Motorhead, “Never Say Never” is just made for the fists in the air, and surely it won’t be just me that spots a “Minus Celsius” Backyard Babies era thing here?

The shortest one is also the last. “Paso (The Nini Anthem”) wants to party. That’s perfect for the Bitch Queens too. Not to be taken too seriously – probably not even by the band – this is as simple as it seems. “City Of Class” though, for all its dirt and grime, is just class.