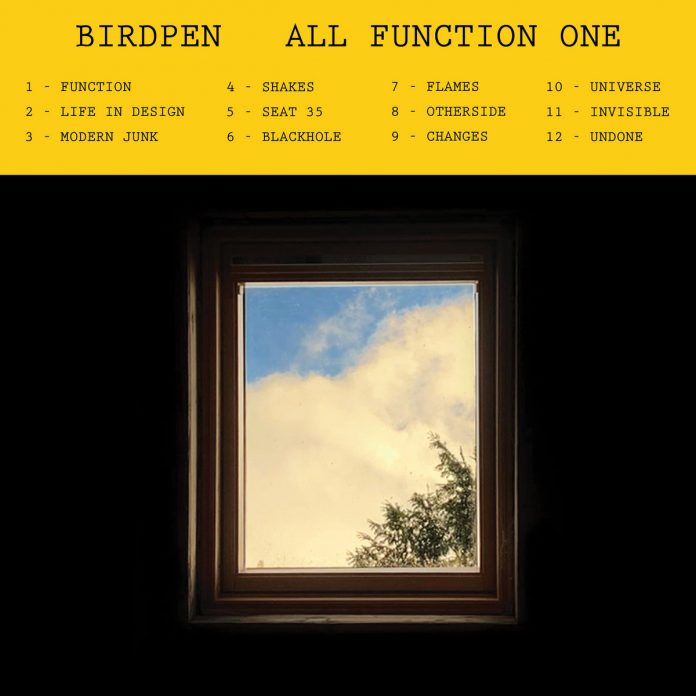 Based on the English south coast, BirdPen mix elements of alternative guitar rock, experimental electronica, and Krautrock with cinematic moods. They have released five studio albums to date. The albums are written, recorded, and produced by the core group duo of Dave Pen (also singer and guitarist in Archive) and Mike Bird. Their latest ‘All Function One’ was written as the world was changing at the outset of the 2020 pandemic and is an album about isolation, digital sadness, loneliness, deep fakes, paranoia and living a modern cyber life.

The album opens with `Function` which has a splayed guitar chord and somewhat remote vocals giving it a quite dystopian texture before synth swathes merge just over halfway through and the track speeds up and seems to relive some of the isolation. I felt there was a nod to the Cure`s `Pictures of You` with `Life In Design` a song about the drudgery of life and how it`s easier to just go along with it as it would make you lose your mind if you thought about it.

`Modern Junk` began with a repetitive drum beat, guitar riffs and vocals and was delivered quite distantly but at the chorus it took a real U2 `Even Better Than The Real Thing` vibe. We have a really melancholic number with `Shakes` with strummed guitar where you can hear the frets as fingers move over them. There`s a real sense of separation, fear, and despair in the lyrics. The addition of piano and strings towards the end gave it a reflective quality.

`Seat 35` is another plaintive offering that seems to relate to having a seat booked for a flight that won`t now happen. A mid-tempo piece with a repeated drum beat and lyric of “I hope I get to see you again; I get the feeling it`s the end” which does little to shift the feeling of despondency. A constant pulsing synth beat, and swirling synths set up a platform for the vocals on `Blackhole` a short composition that relates to staring into a dark vacuum or chasm. A metaphor possibly for these dark times.

`Flames` merges sort of stop start barked statements with a dreamier synth pop sensibility and seems to ebb and flow between both genres as the song progresses. There`s a more hypnotic texture to `Otherside` where the lyrics are shared atop a quite wistful synth-based backing.

`Changes` with its constant electro beat and lyrics that seem to be slightly distorted has that edgy hint of menace that seems to be held down or restrained, for now. There`s an expansive vast feel to `Universe` which is quite fitting and probably reflects the title. A real other worldly or dreamlike quality about it.

`Invisible` is a bit of an odd one. It has a quite intricate recurring guitar chord and constant drum beat pounded throughout the composition that allows the vocals to almost float atop and within the music which is fleshed out with some soothing synth harmonies. The album closes with `Undone` which has heartbeat like pulse leading a deep vocal through this journey with a higher pitched vocal harmonising above. A strange but wonderfully compelling tune to close on.

There was much to enjoy with ‘All Function One’ which was quite varied and diverse with some uplifting numbers and some more melancholic quite reflective pieces. At times it was fairly electronic, then more post rock and then veered towards art rock so something here for everybody. It’s the sort of offering that demands a number of listens as a lot of the submissions need time to seep into your subconscious, very much a grower.