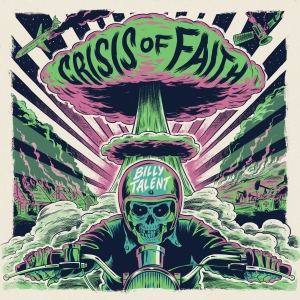 It’s been six years since Billy Talent were last with us.

In that time a lot has happened. Both to them – they’ve got Alexisonfire drummer Jordan Hastings covering for Aaron Solowoniuk, who stepped back from the band to cope with his MS, this time around, and you don’t need me to tell you yet again what has gone on in the world in the last couple of years.

Add to that some of these songs emerged a couple of years back and you were kind of wondering what “Crisis Of Faith” had in store.

The good news is that it’s a mighty fine record. Better than the slightly patchy “Afraid Of Heights” and perhaps the first time they’ve been authentically them, as it were. Whether by accident of social distancing or by design, “….Faith” is produced by guitarist and songwriter Ian D’Sa, and do not doubt that there are one or two surprises here along this 36 minutes.

It begins with a statement. “Forgiveness PT I & II” is more Muse than Anti-Flag that’s for sure, swirling sax mixes with a prog touch here and there, but its got all the lyrical sharpness you’ve come to expect: “its hard to find truth in the dark when you’re begging for forgiveness” sings  Ben Kowalewicz in his usual jaunty fashion.

If that’s the yin, then there’s no doubt about the yang. The brilliant, spitting, punk rock fury of “Judged” is as far removed as you can imagine from the opener – and when it appears halfway through the album, it does jolt out of the reverie.

As an album, this feels like a pick n mix almost. A compilation CD more than a cohesive body. “Reckless Paradise” verges from something Slash might have on a solo record to Jimmy Eat World in the blink of an eye. That’s followed by a radio friendly slice of Green Day ish stuff in “This Will Get Better (I Beg To Differ)” and a rather more epic sounding ballad in “The Wolf” – and that’s the basic template for the record as a whole. Anything goes. Nothing has to match.

“Reactor” is the sort of blue collar thing you can imagine Brian Fallon getting a gold disc with, and there’s no doubt that – as the clever the wordplay on “Hanging Out With All The Wrong People” is – Noodles and Dexter Holland wish they’d got it first.

The lovely “End Of Me” sounded like Weezer even before Rivers Cuomo got his voice around it. That’s followed by “One Less Problem”, insanely catchy and belonging to the early 90s era that spawned Billy Talent, before as if t emphasise that you can’t put the 2022 version in any neat pile, then “For You” has a bit of The Police about it.

“Crisis Of Faith” then, is almost the perfect record for people with a short attention span. The places it goes to in less than 40 minutes are astonishing – a sort of whistlestop tour of the type politicians go on when its election time. That all being said, they are bound by one thing: being superb songs.