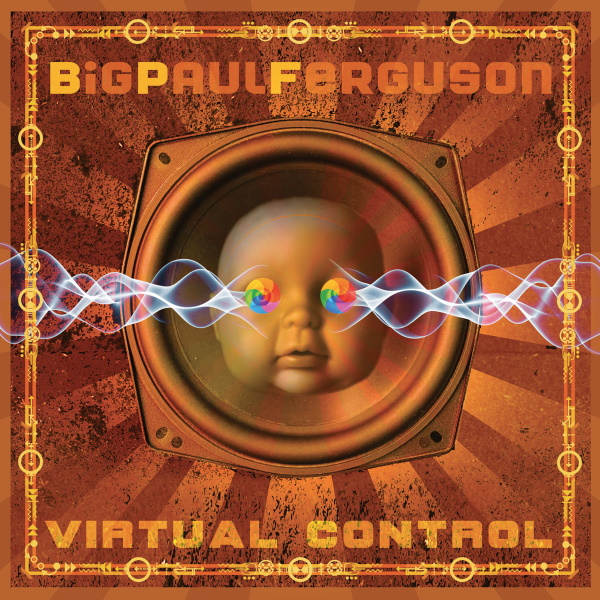 For those who don`t know Matthew Paul Ferguson is an English rock drummer, best known for his work in the post-punk/industrial group Killing Joke. His signature tribal drum style not only set Killing Joke apart from the scores of British bands coming up in the ‘80s, adding both depth and weight to the band’s piercing, discordant sound. His first ever solo album, `Virtual Control` written with guitarist & instrumentalist Mark Gemini Twaite (The Mission, Tricky, Peter Murphy, amongst others…) is out this month. These ten original tracks include special guest appearances from former Marilyn Manson member Tim Skold as well as Jürgen Engler best known as the co-founder and frontman for German industrial metal/EBM outfit Die Krupps.

The album kicks off with `Lapdogs` with its pounding drumbeat sounding like a heartbeat then crashing guitar chords arrive and the almost remote vocals relating the mantra of “Lapdogs of discontent never agree”. It becomes quite hypnotic as it progresses and at times the tribal drumming and scorching guitars are almost urging each other on. The vocals at times almost bled into the melee and there were subtle hints of an organ riff. Again, the sung / spoken word vocal delivery on `Shiny Toys` sounds quite remote. A real blend with it opening with a drum machine type beat, a synth pulse like beat and vocals before the drum grabs hold and leads us on. There`s guitar riffs aplenty and mesmeric vocals delivered atop and at times we have drum solos followed by guitar solos but neither distracting from the driving pace that`s guiding us along this journey.

`The Unraveling` feels wonderfully unnerving with flowing synths, graceful guitar chords and understated percussion allowing a vocal like chant to shine through. We enjoy unrelenting guitar/bass hooks and pounding drumming on `Extrapolate` a song written according to the singer about “How our lives are being affected by isolation coupled with the bombardment of conflicting information. Our trust in what is real and true being challenged on a daily basis.” A delightfully brooding and pensive submission.

`Sea Of Judgement` unfolded with jungle like soundscapes before tribal drumming took over and laid a foundation. There are quite poetic spoken word verses shared throughout this captivating and compelling composition. Swedish musician and multi-instrumentalist Tim Skold features on `Seeping Through The Cracks`. The track has a very dystopian texture, a quite unnerving almost nightmarish edge seems to run through it. It appeared to me to be an opinion on the negative aspects of the American dream.

I wasn`t sure what to make of `Data Lama` which seemed to drift along with some really interesting percussive elements. What I took to be kettle drums may not be, but it had that sort of sound. There`s a narrative running throughout with additional snippets of media/news type soundbites interspersed along the way. a marvellously alluring listen. We have an almost masterclass of drumming on `Glass Houses` which also has some immense guitar shredding and riffs. At times it seems to take a short diversion or break where we are treated to a pulsing heartbeat, maybe to take stock or reflect before we resume.

`Plausible Deniability` is an overwhelmingly encompassing piece which melds bass and lead guitar with drums with vocals delivered atop quite remotely. As plausible deniability is the ability to deny knowledge of or responsibility for any damnable actions committed by others in an organizational hierarchy it`s an intriguing number and doesn`t feel overly long although it runs at over the six minute mark. The album closes out with `Dystopian Vibe` which features Jürgen Engler, co-founder and frontman for German industrial metal/EBM outfit Die Krupps. It builds quietly with soundscapes that almost paint a picture of a post-apocalyptic world or the aftermath of a catastrophic event. The lyrics are relayed in an almost unsettling Big Brother come Bladerunner-esque fashion above.

`Virtual Control` was a totally entrancing, unsettling and absorbing listen. I`m sure that BPF could have made this into a concept album but by allowing each individual song to stand alone probably gave them more impact. There was just the right amount of variety in the compositions from the ruminating `Extrapolate`, captivating `Data Lama` to the ominous almost prophetic `Dystopian Vibe` to satisfy all.         Next time Killing Joke get together I’d be nervously looking over my shoulder If I was Jaz Coleman.