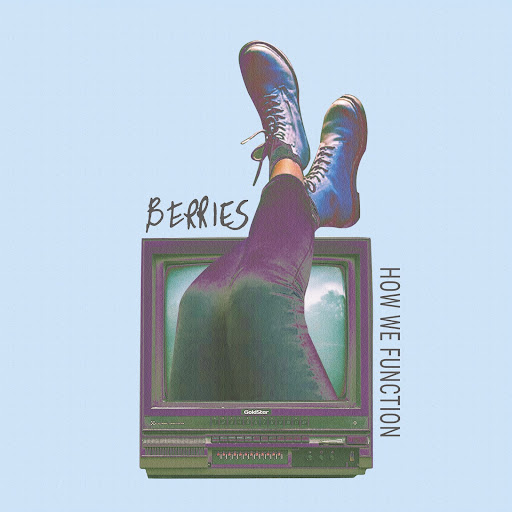 BERRIES are a London based gritty garage-punk trio whose debut album ‘How We Function’ is released this month. The album is a reflection on mental health struggles and how to overcome them and was nearly four years in the making.

The album opens with `We Are Machines` which is a quite melodic track with a little underbite and ebbs and flows as it evolves. The recurring line of “we are machines, it`s how we function” is a real earworm and will have you singing it long after the number has finished. The trio have shared that it`s a song about “struggling in a demanding society and being exploited by people who have little empathy or concern for your well-being. The song touches on how we are forced to become machines, trying to maintain an impossible level of perfection and how we need to fight against this. Admitting we are only human and finding the strength to stand up and push for balance and rights. In turn, becoming a different type of machine.” There`s a more erratic stop/ start feel  to `Spiral` with its jagged guitar riffs, leading bass and pounding drums.

`Basic Tables` is another piece that has an erratic feel but I found it quite dreamy almost mesmeric at times and wallowed in Holly`s rich vocal delivery. We have some really intricate guitar chords shared throughout `The Expert` which felt as if it were about to explode at the beginning. It has a slight edginess about is as at one stage it just seems to have a vocal layered over a drum beat. But the number really benefits from some delightful harmonies shared throughout before it quietly fades.

` Discreetly` has an almost belligerence about it and is a real rock out number which has some delicious fuzzy grungy guitar riffs right at the death. I felt `Haze` had a quite reflective nigh on introspective sensibility and was so well crafted musically with bass, drums and guitar all blending wonderfully. I read that it was written about the barriers we often put up and how scary but also uplifting it can be when they break down.

`Wall of Noise` is fairly fast paced and has that nervous quite anxious anticipation as to what will happen and leaves you waiting for something that doesn`t occur but the thrill is all in that arousal or foreplay. The song relates to the up-hill battle of mental health, the repetitive cycles and trying to escape the loud, nagging voices in your head. Smashing cymbals, a heavy bass line and repeated intricate guitar chords are come together for `Siren` which was a more bluesy offering and something I wasn`t quite expecting.

There`s an enthralling dimension to the vocal on `Grow` which began in an almost folk like fashion before becoming slightly heavier and more thoughtful in its approach. We have further irregular guitar chords on `Strength In Numbers` which again is another composition that has the ability to suck you in.

`Copy` is a more straightforward indie rock out with some complex guitar chords, with subtle bass and drum accompaniment allowing the vocals to soar. It does have a little guitar shredding and delightful harmonies in the latter section. We close out with `Your Mind` which is a little stand offish but has some cracking grungy riffs at times throughout.

BERRIES who comprise of Holly Carter on guitar/lead vocals, Lauren Cooper on bass/backing vocals, and Lucie Hartmann on drums/backing vocals have described their sound as “Energetic riff driven rock with a dash of hair” but it is so much more. The album ‘How We Function’ is full of captivating melodic guitar driven indie rock numbers that will really stay with you. The trio also address the difficult issues surrounding mental health which today are thankfully  less taboo to discuss openly.

Berries are renowned for their benefits to health and The BERRIES here, certainly left me with a warm glow inside, allow them to do the same to you.