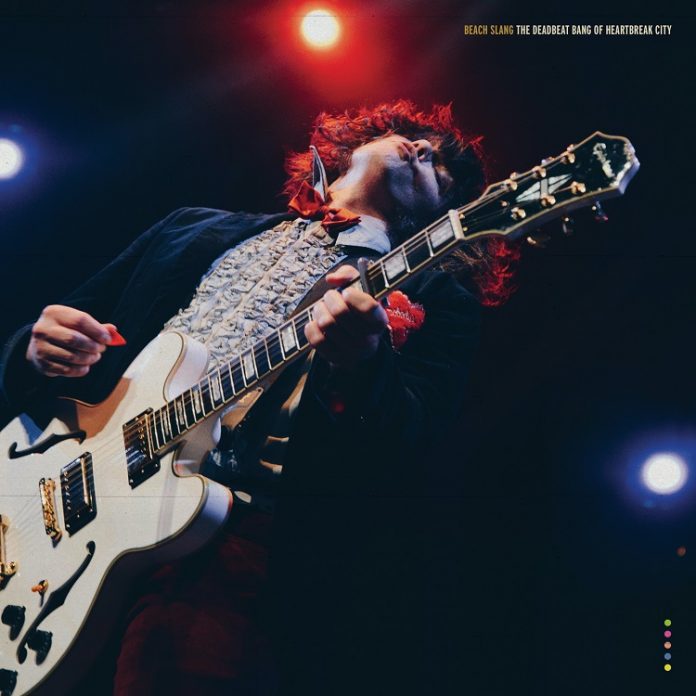 On “Let It Ride”, the second track on “The Deadbeat Bang Of Heartbreak City”, Beach Slang main man James Alex sings this.

On the last one “Bar No One Shoelace”, this seems like a key line:

“I know I am gonna die someday…..but before you toss my bones away, make sure I look pretty lying in my grave….”

That gives an indication as to the journey here. This is rock n roll at the most basic, the rabble rousing, live fast, die young theory is writ large all over this.

The first Beach Slang album proper in four years (there was one released under the name Quiet Slang in 2018) and not only is it superb, it is also special. There’s a bass player here that you may know. Tommy Stinson from The Replacements lends his four string skill and all round cool to this, and goodness me, he does so on a record that is right out of the top draw.

“Bam Rang Rang” is screeching, almost punk and it sounds like The Replacements are jamming with Cheap Trick mostly. Or at least it does until the almost “Smoke On The Water” riff turns up half way through.

See, for all this understands its heroes, it also understands that you don’t need to copy them, and this gang has a real biker feel. “Tommy In The 80s” – the first single – is a real shining gem too, but it is important for other reasons. Written by Alex when he learned of the death of power pop legend Tommy Keene and the emotion shines through.

Mostly this is screeching and snarling, but it has some moments of real tenderness. “Nobody Say Nothing” is acoustic and summerlike, with its strings, but scratch away the layers and you will find something – even here – you weren’t perhaps expecting. “It won’t kill me, sometimes I wish it did….” Is the half whispered, almost apologetic conclusion to this, before the lovely “Nowhere Bus” almost acts as the second half of a medley here. “Stiff” on the other hand, changes gear, and has a real arena ready sound. Sloganeering is the order of the day too, and the grooves are huge.

I don’t know about you, but when I see a song called “Born To Raise Hell” I almost want it to be a Motorhead cover. This one isn’t, but they do know how to do it, and they do it real well, and “Sticky Thumbs” has more energy in two minutes 45 seconds than it has any right to, as well as recalling Boston power pop boys “The Connection’s heavier moments.

“Kicking Over Bottles” has the same blue collar sonics as that band from the mid-west, The Hold Steady, and really, the feel of the whole of this album is close to the early work of Finn and the lads, but an example of Beach Slang doing it their own way is on the aforementioned “….Shoelace”, which in a sea of three minute gloriousness, stretches to well over six, and is kind of prog rock too.

“The Deadbeat Gang Of Heartbreak City” is so good it would have been worthy of that other great Philly band, Marah, and I’ll bet BS are just as free of BS live as they were too.

You know when James Alex sang about rock n roll and was unsure if he was good at it or not? Well he is. Very. This is the proof.

Previous article
GONNA BE OK FOR BLOODHOUND
Next article
ARTIST OF THE DAY: LOUISE PATRICIA CRANE