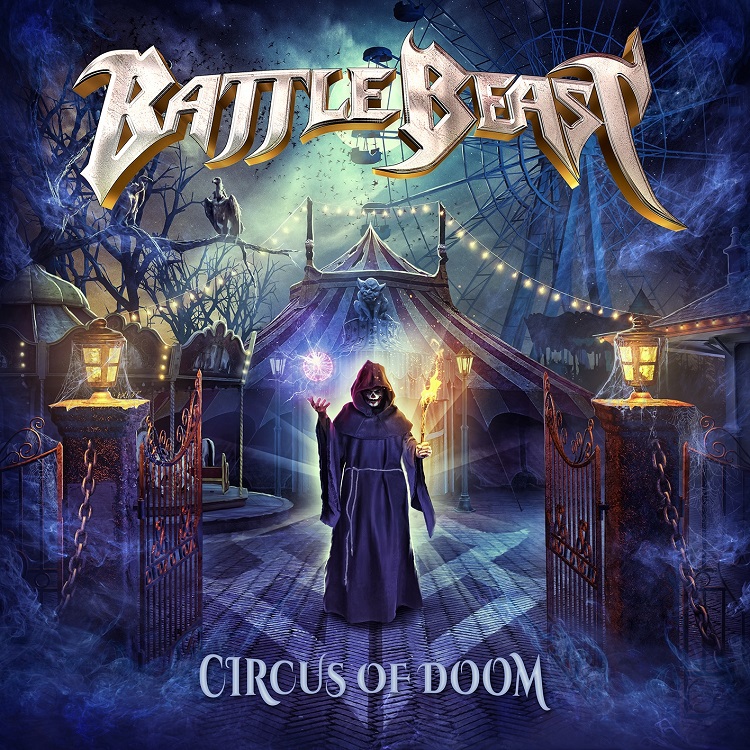 Roll up, roll up for ….well, what exactly?

A Big Top full of the most bonkers metal? See Battle Beast reckon they’ve invented “Circus Metal” with this – and furthermore they claim it’s a loosely based concept record around “the circus”. And that set me thinking: have I ever been to the circus? I don’t think I have. For one thing my younger brother was scared stiff of Clowns, but no, I can’t recall ever going to the Big Top, ever. Have I missed out? Who knows. I’ll let Battle Beast be my guide, here.

It’s been three years almost since BB stuck out the brilliant (and intentionally ludicrous) “No More Hollywood Endings” and the world has gone to hell in a hand cart since, we all know this. Call this your escape room, frankly.

I began my review of the last one with a confession that “I loved this sort of rock”. Well now I am out and proud and the title track reassures you that the world is – basically – still the same as it ever was. Somewhere between Eurovision and a metal take on a Bond theme, the modern world doesn’t even get close to this – and neither should it.

“Wings Of Light” takes the power metal template and sprinkles it with sparkly shit. If Saxon reckon denim and leather brought us together, then Battle Beast think “yeah sound, but isn’t a glitter ball even more fun?”

“Master Of Illusion” is but a heartbeat away from a disco, arena filling “Where Angels Fear To Fly” is almost the identikit Battle Beast sound, and the word “epic” was probably invented for “Eye Of The Storm”, but there’s no doubt about what this record’s highlight is.

Right in the middle, shining like a beacon of hope in the mists of 2022, is “Russian Roulette”. The sort of thing that sounds like it should have been in a musical. Its mad, its fun, and you try and not smile when it’s on. I dare you. You can’t. You won’t. It’s impossible.

The thing is, Battle Beast are superb at what they do. They could be a conventional metal band. “Freedom” – which is as close as they get – proves that, and Lemmy (substitute that name for any God you choose) knows that Joona Björkroth can kick out riffs like the best, and Noora Louhimo can sing incredibly, its just that they see the world a little differently.

That’s why there’s bells on “The Road To Avalon” – least I can’t think of a better reason (and that’s why they work so well) and why they turn “Armageddon” from a pop melody to a fists in the air rocker at a moments notice.

They take a curtain call (do they do that in the Big Top?) with “The Place That We Call Home” its massive, its got drums from Pyry Vikki that thunder. They crush, and the thing sounds as widescreen as anything Dragonforce ever did. You can almost imagine this as being the soundtrack to an 80sv fantasy film and the credits rolling as the solo plays.

Battle Beast are not only brilliant, but they are also unashamed. “Circus Of Doom” is the sort of thing that you wouldn’t want every record to sound like, but at the same time are thrilled this one does.