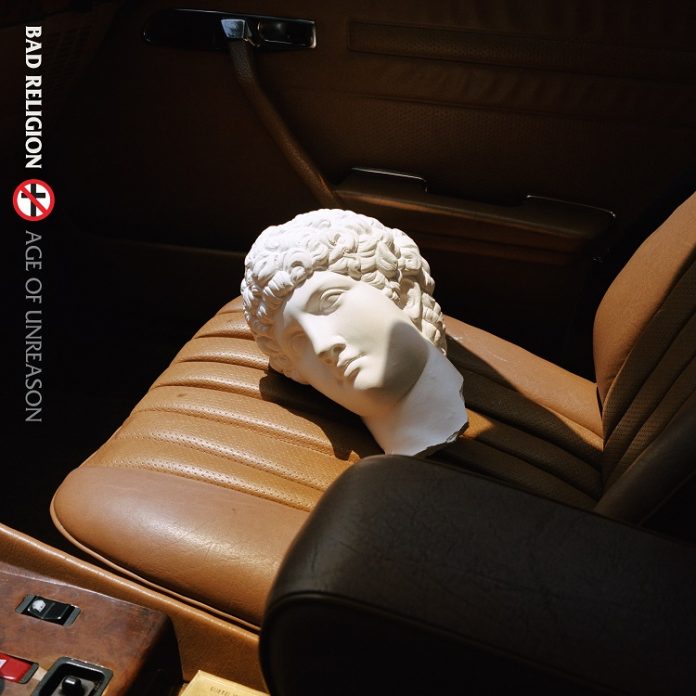 It seemed like a bit of a laugh in 1994 when LA Punks Bad Religion sang this single that I bought one lunchtime at work because it was fun.

“Cause I’m a twenty-first century digital boy/I don’t know how to live but I got a lot of toys”. A catchy chorus, a bit of a comment on the way the world was going.

25 years on, Christ almighty. I’ve just listened to the news on the radio. “Populism” is on the rise all around the world, there’s a bully in the White House, there’s paralysis over here, the earth is dying unless we fix it, oh and terrorists have just killed 250 people in Sri Lanka. But its ok, we’re all connected through Facebook.

Still seems like a giggle, this 21st century stuff, right?

Enter Bad Religion. “Age Of Unreason” is their 17th record. It’s also their best for ages. Probably because its their most vital.  As co-songwriter and guitarist Brett Gurewitz explains: “The band has always stood for enlightenment values. Today, these values of truth, freedom, equality, tolerance, and science are in real danger.  This record is our response.”

And goodness me, what a “response” this is. “Age Of Unreason” is quite stunning.

Everywhere you turn there is some piece of genius, some vignette that nails its target.

“Chaos From Within” rumbles at a million miles an hour – but Bad Religion have a melody, they always did, and they understand that this message needs telling with a sugar-coating before it delivers its knockout blow.

There are 14 of knockout blows here, in a little over half an hour, and the music – you can assume this – is brilliant. Fast, crunchy, and the lead guitar is incredible, but I am a lyrics man, so I’ll just glory in “there’s no sane reason for optimism”, which comes in “My Sanity”.

Then, even before you’ve decided this is the best thing you’ve heard, “Do The Paranoid Style” destroys not only the political system in the US, but everywhere. “if you’re on the left or right, I feel your pain tonight….”

Greg Graffin, the man singing and co-writing these words with Gurewitz, is a PHD and these lyrics are about as far away from the dull “maybe, baby” crap pedalled by many as you can possibly imagine. “The Approach” deals with the dumbing down of society by merrily constructing arguments that its targets wouldn’t understand. “Lose Your Head” on the other hand, does this. “and while recent developments seem like bad news for humanity / self-pity is always a case of mistaken identity”. Now, I love Poison and the likes, but “Nothin’ But A Good Time” this is not.

And yet, it is a hell of a good time. It really is. The bass and drums of “End Of History” could – and will – engender a moshpit, but then they smash you with: “nostalgia is an excuse for stupidity” and you can only marvel.

How many punk rock albums have a title track that uses Thomas Paine’s “The Age Of Reason” as a starting point, I am not sure, but this one does. That’s why Bad Religion rule. “Candidate” on the other hand, is more acoustic, slower maybe, but hits home with precision.

“Faces Of Grief” is an interesting one. 65 seconds of fury that recalls Madball and the likes, it is balanced by the absolute jewel in the crown here. Even if “Old Regime” wasn’t a truly brilliant song, then it still contains the line: “if everything is subjective, then what good is truth anyway?” Now, I don’t have any tattoos, but if I did….

“Big Black Dog” has a big old groove, and some post punk tinges, while “Downfall” actually has some glam stuff going on. Cheap Trick might do this, and that’s just fine.

Perhaps because we are all going to hell in a handbasket, there is a real urgency about this record, and that’s evident in “Since Now”, and as if to exemplify the uncertainty around everything at the moment, the collection doesn’t find light at the end of the tunnel, instead offering the questioning “What Tomorrow Brings” as a conclusion.

When this came, someone said to me: “Bad Religion? You can’t go wrong, you know what you are going to get with them…..”And that’s true: the most thought-provoking punk rock you can imagine. But then, even though you might know what is coming, then “Age Of Unreason” does it perfectly, and is absolutely flawless.