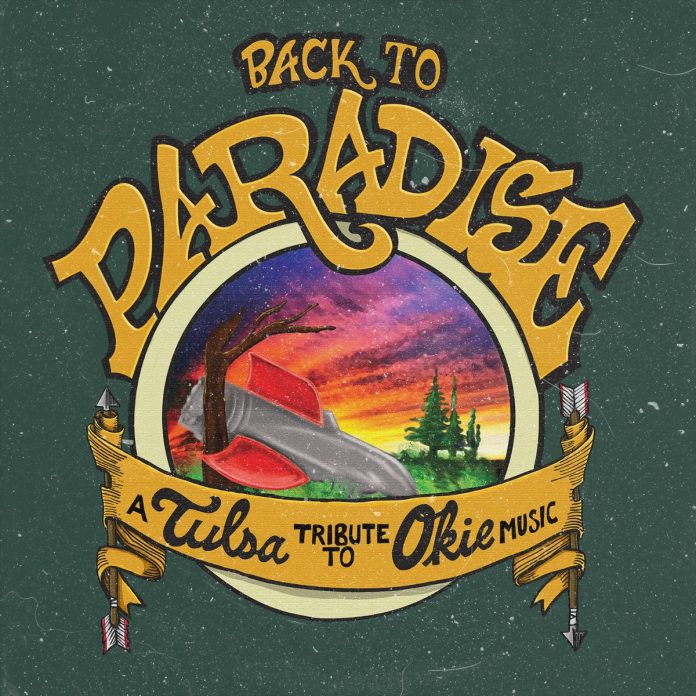 Leon Russell built three studios in Oklahoma in the early seventies, one being Paradise Studio at Grand Lake in Tia Juana and many renowned artists recorded there such as Bob Dylan, Bob Seeger, Phoebe Snow, J.J. Cale, Freddie King, The Gap Band, George Harrison and Eric Clapton. In February of this year, this famous studio saw recording take place once more, for the first time since 1978, thanks to the sterling work of Tulsan Rick Huskey, who has spent the last thirty years preserving and restoring the space. Twenty musicians assembled to recreate seventeen songs written by some of Tulsa’s most celebrated songwriters which range from the famous to the obscure, the result of which is “Back To Paradise: A Tulsa Tribute to Okie Music”

Paul Benjamin, a guitarist who grew up in Inola, Oklahoma not only played on all seventeen tracks but sang the lead on five. We get a pretty close cover of Tulsa based country blues Don White`s `Helluva Deal` from his Patchwork album but delivered with Paul`s deeper vocal. An excellent upbeat driving blues number. There`s a more piano and organ driven number with 1960s and 1970s psych-rock group Teegarden & Van Winkle`s `Mona Sweet Mona` which has some delightful brass thrown in for good measure. The late roots rocker Steve Pryor is covered with `Misery Kickin` In` a nicely paced tune that had me in mind of Dire Straits at times. The final two songs that Paul shares are written by Tulsa native JJ Cale with `I`ll Make Love To You Anytime`a song also covered by Eric Clapton, which Paul has kept faithfully to the original but adds some amazing guitar picking throughout. The other being `Ride Me High` which is quietly almost reverently shared. This tribute expands to almost nine minutes and with guitar, organ and the steady drum beat it becomes wonderfully hypnotic.

Grammy Award nominated John Fullbright, a singer-songwriter from Okemah, Oklahoma, one-time member of country music group The Turnpike Troubadours is another core member of the band and took charge of a further three numbers. He covers the late folk music singer-songwriter, guitarist, and film and television actor Hoyt Axton`s `Jealous Man` and really makes it his own. The song is really filled out with some wonderful horns, organ, and John`s superbly rich vocals. `If The Shoe Fits` an almost throwaway Leon Russell narrative gets a lick of paint and it`s the sort of number that cannot help but put a smile on your face. His last tune is a tribute to Steve Ripley, who was a member of country rock band The Tractors before his passing away last year. `Crossing Over` is a touching gospel number with just about the right amount of everything thrown in, harmonies guitar chords, drums, and organ.

A further core member Jesse Aycock also offers up three numbers. There`s a real homage to Pryor born Jimmy `Junior` Markham with an equally funky version of `Black Cherry` with some cracking harmonica twinges, guitar riffs and hand claps towards the end. `Rock N Roll Gypsies` a song from the mid-sixties by The Gypsy Trips, a musical duo composed of Terrye Newkirk and Roger Tillison gets a real restoration. Jesse and the band bring a real wistful almost nostalgic feel to the track. Jessie`s final piece is a transformation of the late Jesse Edwin Davis`s `Tulsa Country.` Jesse Ed Davis was a Native American guitarist born in Norman, Oklahoma, a one time member of Taj Mahal’s backing band and played with musicians such as Eric Clapton, John Lennon, and George Harrison. I have to say I really loved this song`s reinterpretation which has a heart-breaking country texture about it, complete with some magnificent steel guitar.

Tulsa based Dustin Pittsley takes on a couple of numbers. The first of which is a funky slinky version of Jim Byfield`s `Can`t Jive Enough` with some intricate guitar chords and sweet organ musings along the way, a real foot tapper. The other plays deference to the late Tom Skinner and Don Morris`s `Blind Man` A mesmerising song where you can feel the sweat, effort and emotion Dustin puts into it. Stunning.

Sarah Frick shares a dazzling updated version of `I’m On Fire` a song written by Dwight Twilley which gave him a top twenty hit. The vocals and guitar almost egging each other on in this rock pop masterclass. Roots Country musician Jacob Tovar adds his version of electric country`s Cliff Beasley`s `I`m Gonna Get To Tulsa` and it`s a joy to behold. The rhythmic drumming, guitar licks, piano shimmers and harmonica colourings made me feel I was on the road heading to Tulsa.

Classic soul singer and Tulsa resident Branjae supplies a blistering version of Atoka born blues guitarist and songwriter Lowell Fulson’s `Tramp` A `don`t mess with me` singer she really owns this number which she supplies with just the right amount of attitude. The backing band`s steady drumbeat, guitar licks, sleazy organ and subtle brass sets up a platform for this talented lady to shine.

We have a good couple of minutes of instrumental funkiness before Charlie Red & Briana Wright join the band on this extended adaptation of `I Yike It` made famous in the seventies by Tulsa R&B and funk band  The Gap Band formed by brothers Charlie, Ronnie, and Robert Wilson. Marvellous stuff.

I was really blown away by this well thought out and executed tribute. It introduced me to some bands that I’d never come across before such as Teegarden & Van Winkle and Gypsy Trips who I’ll be investigating more thoroughly and reacquainted me with artists I`d lost touch with such as JJ Cale, Leon Russell and Dwight Twilley. The musicians and musicianship on this release are exceptional and highlights a wealth of undiscovered and unrecognised talent that lies within the Sooner State.

Hopefully, this release may go some way to rectifying this situation.