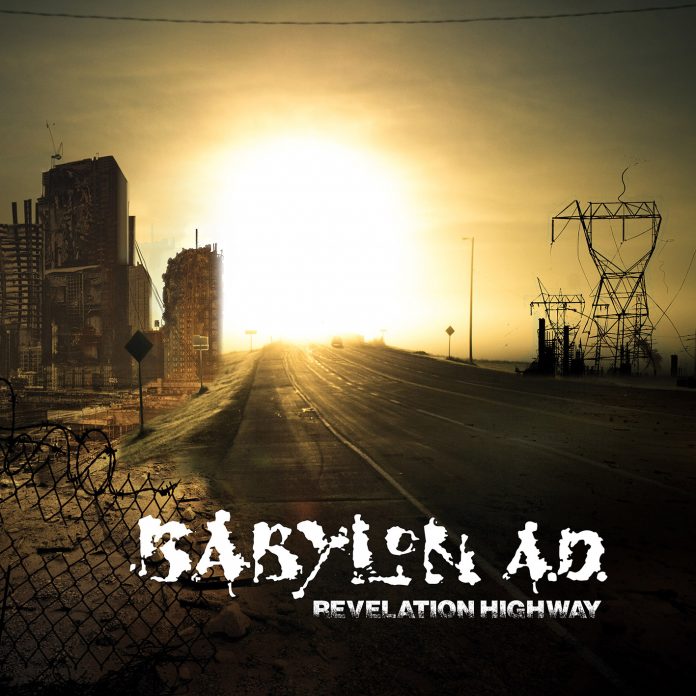 There’s a line on “Crash And Burn” – the opening song on “Revelation Highway” –  that says more about the record than 500 words on MV ever could.

They are about to head into the final chorus when singer Derek Davis says, with a certain malevolent glee: “we just can’t stop now….fuck it!”

“….Highway” marks their 30th anniversary (MV is old enough to have owned their self-titled debut on cassette) but more importantly,  it is their first record for 17 years. Or put another way, “we just can’t stop now…..”

And, where reviewing the albums of their peers is an often fraught business (labelmates LA Guns, for example were forced to release a statement clarifying which of the currently operating bands singer Phil Lewis had quit when he re-joined the “classic” version) there are no such to-do’s with Babylon AD.

The band are here – just as they always have been – build around the core of Davis, guitarists and songwriters, John Mathews and Ron Freschi, drummer Jamey Pacheco and bassist Robb Reid.

Maybe it’s that shared experience that means that Babylon AD plug into a groove as easily as they do on the aforementioned “Crash And Burn” a slice of vintage escapism, all open roads and you and me against the world, you can feel the 17 years washing away.

In that downtime Pacheco and Davis have released albums in separate blues bands and that influence shines through, “Fool On Fire” in particular occupies a world away from the San Francisco landscape that spawned them, but it is far from the only one.

“One Million Miles” on the other hand is a mid-paced rocker, while “Tears” will raise a smile and evoke memories of all those who loved AOR back in the day, and yes, we did think of Nelson here.

But lets be honest, music like this needs a dollop of sleaze. “She Likes To Give It” – self evidently perhaps – provides that. Hell, it actually kicks in with a whistle and gets down and dirty from there, while “Rags To Riches” tells the familiar tale over a chug. Think “Fallen Angel” by Poison and you aren’t far away.

Babylon AD are superb at this, though. “Last Time For Love” serves up killer harmonies, and “I’m No Good For You” has a real thump in its grooves, and “Saturday Night” is elevated above the norm by the wonderful twin guitar solo at the end. There’s even a little bit of Motley about “Don’t Tell Me Tonight” which closes things with one last slice of a bygone age.

That said, why “Revelation Highway” is so good is as simple as the band family tree. They know the past, but they know too, that nostalgia is good for the kitsch market and not a lot else. Rather, if you are going to put your name to a brand-new record it needs to add to your legacy rather than pilfer shamelessly from it. “Revelation Highway” absolutely does that. You could listen to this and think it was a new band. And, as such, it is quite the ride.