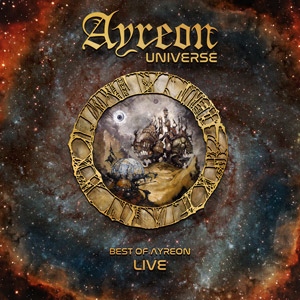 Do any MVM readers remember ‘Time Gentleman Please’? This was the Sitcom on Sky that launched Al Murray’s Pub Landlord to the larger UK audience back in 2000 (the first Series is particularly funny and worth checking out). The reason I mention this is that one of the main characters was a nerdy bloke, who because he wore glasses was known as ‘Prof’.  He was also a big Star Trek fan and would regularly trot out Star Trek anecdotes but before he’d really get going the rest of the pub would howl ‘Grow Up Prof’. Well when I play Ayreon at home I get a similar response from wife! His lyrical mix of Dungeons & Dragons, Star Wars and The Terminator, all set to music, may not be to everyone’s taste but give the music a chance and the sheer quality of it shines through.

For those not familiar with Ayreon and his music, it is Prog Rock with a capital P.  It’s theatrical, it’s musical, it’s very European and best of all, there are plenty of places where it properly rocks. Until last September Ayreon only really existed as the studio performances of  Arjen Lucassen. He played the majority of the instruments and did a fair bit of the vocals but all of the albums featured guest musicians and vocalists and over time he has become a major artist in Europe. He’s well known to suffer chronic stage-fright and for this reason live shows have been non-existent.  It was therefore to everyone’s surprise that he played three shows last September and this Blue Ray/DVD/CD/Vinyl release is the document of those shows. So is it any good?

Well I suppose the important thing for a filmed release is that the images supplement the music and vice versa and in this respect it’s perfect. It’s superbly filmed and the picture and sound quality is excellent. The backdrop of the stage is a huge screen and the images in support of the songs work really well. A core band plays the music and is assisted by a rotating cast of vocalists, who are a virtual who’s who of Euro-Metal. The Band are in top form and the basic drums/guitar/keyboards core are embellished throughout by violins, cellos and flutes – Aryeon doesn’t do things by half and if it makes a noise then it’s in a song.

The song choice is pretty much what any Ayreon fan would want to hear as it’s a complete career perspective that mixes the heaviest songs he does with some altogether more gentle tracks. For those not that familiar with Arjen Lucassen’s music, expect to influences of Euro Symphonic rock like Nightwish and Within Temptation mixed with Prog Metal like Threshold and Symphony X – I’m almost describing a Dutch Dream Theater when you think about it. The whole concert comes across as a piece of theatre rather than a rock show and is more interesting to watch as a result.

The surprising thing is that Arjen himself does not appear to one and three-quarter hours in, for what is effectively the first encore. He gives a length explanation of how he suffers stage-fright and hates speaking in public. You would never tell as he looks and sounds relaxed and the song he then plays with the Band, ‘Amazing Flight In Space’ is probably the star of the show. Musically it’s a real kitchen sink number but the whole thing seems to go up a level with the main man on stage and it’s a shame that he is effectively only playing on one song. It’s probably my only gripe but the reasons are understandable and it’s does give the show the feel of a West End Musical as it’s a performing cast rather than an individual’s live show and it works so well on that level.

So it looks great, it sounds great and the choice of material is bang-on. In short it’s everything an Ayreon fan would want. More importantly it’s a good enough release to attract new fans. His music has a real depth and takes repeated listens to get the full benefit. For those less patient, the accompanying concert footage may help with the journey.

The album is released in all formats on 30th March and Mascot Label Group still has some signed copies available.

Previous article
ARTIST OF THE DAY: MAWD
Next article
A Little Bit Of Arkansas For The UK