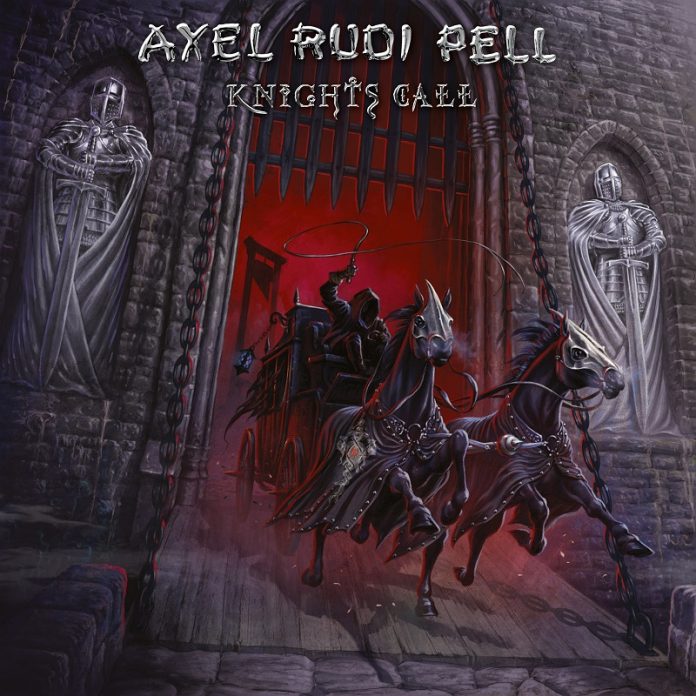 Even if Axel Rudi Pell was crap there’d be every reason to admire him and his attitude.

The German does things in exactly the right way. Under the radar and because he loves it. Limelight is not for him, and yet he’s sold 1.5 million records since going almost 30 years ago. His last record – 2016’s “Game Of Sins” peaked at number 11 in the German album charts. Not too shabby for a man who modestly says this when asked of his future plans: “As long as I can do what I like I’m the happiest man in the world.”  Furthermore (even better in the eyes of your humble scribe) he can’t stand the need to chase fans on Social Media. In the press pack for “Knights Call” – album number 17 if anyone is counting – he bemoans the modern world, thus: “Everybody is looking for the fast buck and for attention, everybody is online all the time, for just a couple of sad clicks and likes. We are on the road without arriving wherever that might be. Is this what life is all about, being stuck to a computer?”

Now that we’ve established that if Axel Rudi Pell was running for office he’d have our vote, we can come back to the original statement and say this: Axel Rudi Pell is anything but crap. He’s very, very good indeed.

The fact that he’s doing what he loves is all through this. “The Wild And The Young” has the word “Metal” written large all through it. Soaring vocals from American Johnny Gioeli are at the heart, but with enough chug and soloing to satisfy anyone. Pell is a wonderful guitarist, but never at the expense of the song – perhaps because the album’s he makes, although a band effort, are hewn in his vision. He had, apparently decided that this was to be opening track from the outset.

If it was designed to set the tone, then it most certainly does. “Wildest Dreams” adds a little gallop, a touch of the “more, more, more” attitude of Power Metal but also the organs of Deep Purple. However, whilst it drinks, if you will, from the same fountain as the greats, it is very much the sound of a modern thinking band too.

Never is this better shown than on the fists in the air, bass driven glee, of “Long Live Rock.” Not for nothing does it contain the simple sentiment of “long live rock” at its heart. Bands like Edguy have made a career of this type of thing. You could argue that ARP did it first.

There are a trio of real epic moments here too. It is meant as a huge compliment to call “Crusaders Of Doom” wonderfully verbose. Coming right in the middle of the record, it acts as something of a centrepiece as it makes for the nearest arena armed with a sword and a monolithic riff. It is to the credit of all concerned that each of the lengthy triumvirate offers something else. “Beyond The Light” is piano led, a ballad that wouldn’t be out of place on a latter day Magnum record, while the final one closes the collection down. “Tower Of Babylon” is a ten minute thing that recalls the work of Symphony X, perhaps, while bringing it’s own Eastern flavours to the table, and some classical orchestration for good measure.

“…Call” though, is not po-faced as some metal can be. It knows how to have fun. “Slaves On The Run” is the sound of hair being let down, while “Follow The Sun” starts with fireworks and moves on from there.

Indeed, even the instrumental here is fun. On “Truth And Lies” The band lets themselves go and comes up with something reminiscent of a sea shanty. Call it pirates, dungeons and dragons, call it what you like, but crikey it sounds like metal should.

So does the rest of the album. Maybe it comes from a love, a feeling of wanting to do it, not being obligated, but whatever it is Axel Rudi Pell has a way of making this sound music so vibrant. Forget the “Knights Call.” This is the calling for Pell himself.

Previous article
BAND OF THE DAY: MONUMENT
Next article
Now, This Is Magic