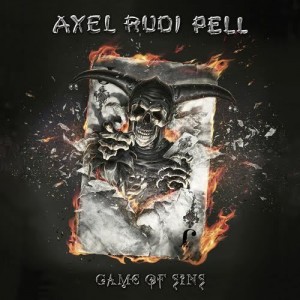 Despite the shower of praise that inevitably comes with being a heavy metal guitar icon it’s surprising how little coverage is given to a man of the talents, dedication and musicality of Axel Rudi Pell.

Many guitarists are lauded these days as great guitar players because they treat the fretboard like a burning lightsabre. Technically they may be fine musicians who can play all the notes, often in the right order, but can they produce memorable riffs or soaring solos? In short the answer, for the vast majority, is no. Not even close. This is brought into focus more sharply when listening to Pell. A man who has paid his dues several times over and by rights should be right up there with the legends of the six-string. Too many people he is a legend and their steadfast views will be validated on Game of Sins.

The short intro “Lenta Fortuna”, Latin for “Bad Luck”, leads into “Fire”, a barnstorming track in the classic melodic heavy rock style with which Pell has made his considerable name. As far as making an immediate statement goes they couldn’t have done much better. It contains a great chorus, classic riff, driving drums and a great solo. What else does anyone need?!!

The quality level remains firmly stuck at the top as “Sons in the Night” follows. It’s a powerhouse peon to the NWOBHM that is pushed by a pulsating riff that stands up with anything that Pell has previously produced. Since beginning his solo career in 1989 Pell has not looked back and continued to produce melodic heavy metal/hard rock full of razor sharp riffage and incisive solos that have now become his trademark.

The title track provides the first change of pace as a monastic chant accompanied by some jangling guitar work leads us to a slow but strong pounding rhythm that takes over. From there an unstoppable momentum has built up that takes a couple of twists and turns over it’s eight minute length before returning back to it’s humble but powerful beginnings.

Former Hardline main man Johnny Gioeli is, as he has been for the past 15 years or more, the voice of ARP’s music and he once again nails it with the style and panache that everyone has come to expect as standard. In actual fact there hasn’t been a more consistent vocal performer in the hard rock genre over the past twenty years that Gioeli. Never has this been illustrated more than on “The King Of Fools” where he gives somewhat of a masterclass on the art of melodic hard rock vocals.

Fans of air-drumming will have a field day with this album as the invisible drumsticks will pound the invisible drums in time with Bobby Rondinelli, who stamps his authority straight from the off , an accusation that the drums on the last album, 2014’s Into The Storm, were somewhat lost in the background has been seemingly taken onboard.

The line-up has been consistent now for many years, aside from Rondinelli who replaced Mike Terrana in 2013, and that tightness and chemistry can certainly be heard over the course of the album. Whether it’s Ferdy Doernberg adding his keyboard wizardry or Volker Krawczak’s driving bass lines the album sounds like a true classic band rather than the whim and will of one man.

The aforementioned “Fire” and the full-speed “Falling Star” can count themselves amongst the best tracks on the album, an album that is devoid of filler and is most definitely killer. Also “Till The World Says Goodbye” deserves singling out for praise with an intense power that harks back to Gioeli’s days with Hardline.

The obligatory lighter-in-the-air moment is captured with “Lost In Love”, a track that has a heart as big as the soaring melodies and avoids the most obvious clichés and comes up with something genuine and inspired.

To top it all off is a stunning and refreshing take on Bob Dylan’s “All Along The Watchtower” which takes the classic Hendrix-version up a notch and into hard rock and allows Pell to cut loose with controlled abandon and a wild spirit that is a sheer joy to behold.