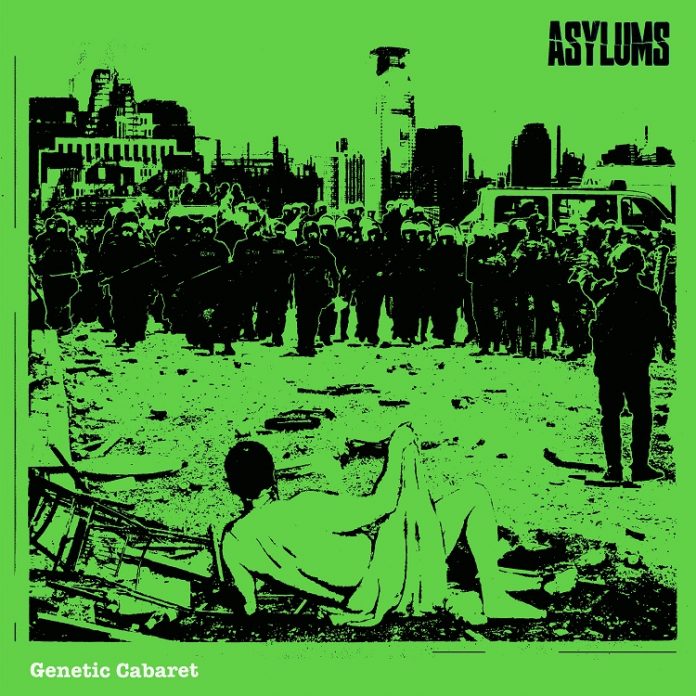 Everywhere I look, right now, there are reminders that I am getting old.

The other day, for example, I was looking at my Twitter feed and Everclear (a Portland, Oregon band that probably don’t mean as much as they should these days) had put a tweet out saying one of their albums was released exactly twenty years ago.

I can remember calling in to the record shop on my way home from work to buy the damn thing and I can remember playing the shit out of it.

So you might have to forgive me, then, if I review “Genetic Cabaret” with a more nostalgic air than it deserves.

Because whilst there is no doubt that Asylums absolutely – and correctly – believe the future is theirs, to me, it has the air of one of those bands I used to hear when I bought NME for the Free CD in about 1994 when I was buying Kerrang.

Take the absolutely glorious, copper bottomed classic that is the opening song here. “Catalogue Kids” is part Oasis and part Senseless Things. That is to say, this is the work of rock n roll stars, but it’ll give you the same sugar rush as when you heard “Christine Keeler” (maybe you haven’t? Stick it on to your to-do list, please)

Cards on the table, here. Like I said last week when I wrote about DMA’s new album, I am not an “indie” kid. Never was even when I was a kid, but whilst there is some validity to the assertion on the press quotes that the Southend mob sound like “Blur if they were signed to Sub-Pop”, then listen to the wilful playing about with the formula on “Platitudes”, and tell me this is a band who isn’t doing it their own way.

Likewise “A Perfect Life In A Perfect World” is unashamed that it wants to be a big anthem, and “A Town Full Of Boarded Windows” is sort of jangly, but has a big hook. All kinds of bands I used to go and watch in the 90s spring to mind. My Vitriol, even early Feeder.

But then, when they want, they break out some kinda scrappy punk. I was  thinking on Nirvana listening to “Clean Money”, but I don’t know if that’s just because Steve Albini is Producer here (and if anything made clear the leap forward of this album better than that, then I don’t know what it is).

The album was written as a reaction to the awful political and social situation that existed even before Covid-19 and of all the lyrics that deal with the claustrophobic nature of things, then “Who Writes Tomorrow’s Headlines?” with its oddly disconcerting melodies, is particularly striking, while the maelstrom of “The Distance Between Left And Right” is a cry for clarity.

There are so many textures, for all the harsh, almost anxious stuff, there is a lovely ballad with “The Miracle Age” finding some light in the confusion – musically at least. “Adrenaline Culture” taps into a similar kind of vibe as Dinosaur Pile-up, “Yuppie Germs” is built around some thunderous bass, the title track belongs on the dancefloor of an indie club in the late 1990s, where I went if there was a girl involved, and probably played some Almighty records on the way home after she’d left with someone else (that’s actually pretty accurate as a summation) and the feel that this is a band that is just scratching the surface is all over the last one. “Dull Days” could have been on the last Mystery Jets record, and has a real ambition about it.

I mentioned Dinosaur Pile-up above. There is one other thing Asylums have in common with them. Last year DPU stuck a record out, and by the end of the year if you could get a ticket for their gigs you were doing very well indeed (or knew their publicist, which is how I got in to the gig in Brum…..). I know gigs are not going to happen in 2020, but the point’s a valid one: With “Genetic Cabaret” Asylums could be real break-out stars.