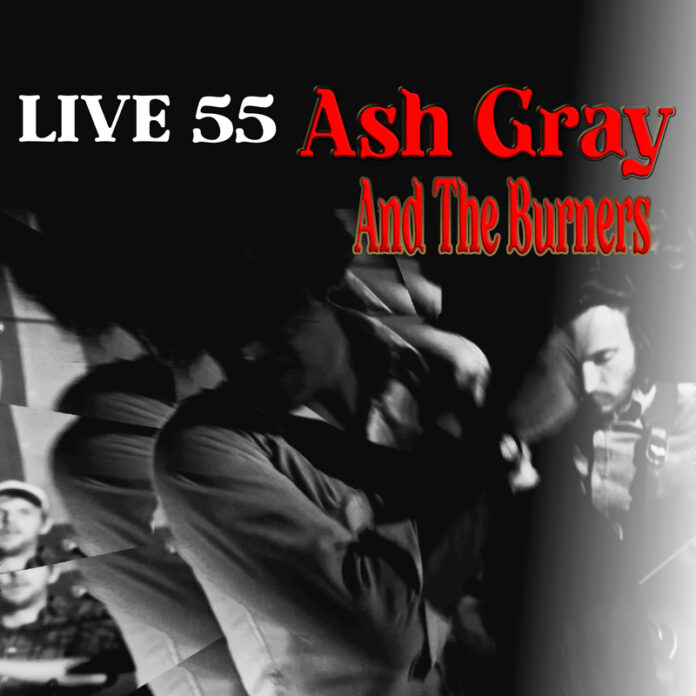 Here’s a thing I’ve learned in the eight years I’ve been doing MV: never blag it. Someone always loves the bands you review more than you do.

So, here’s the honesty. “Live 55” is the first Ash Gray album I’ve ever heard. Which means that reviewing a live album that’s full of stuff you haven’t heard is a challenge, however there’s two things here. 1) Ash Gray makes it easy by having music that is instantly timeless 2) It’s so good that if I don’t review it there’s no hope left.

The background to this is that Ash Gray And The Burners decamped to the Dorothy Pax pub in Sheffield to play a show. The band had been infused by what Gray terms “a new energy” and they were eager to capture it.

That’s exactly what these 12 songs do.

From the opening of “Jerimiah” it’s clear that for AGATB, the music matters like nothing else. Jim Widdop’s Pedal Steel is at the heart of this one, and although it gives a rootsy feel, there’s nothing that quite evokes feelings of desolation and open spaces like that sound to me.

There’s a wide-screen, almost cinematic feel to “The Creek Don’t Rise” matched by a sense of foreboding in the words. A kind of Calexico hint, and really the music is as interesting as the man himself.

Born in the US to Yorkshire parents, Gray has lived the life of a troubadour (as well as a spell in the Cycle Sluts From Hell) and that feeling of not quite fitting in is all over this collection. Giving it a unique feel.

The shuffle of “Two Lane Blacktop”, and “Billy” – which is dubbed as a song about the old west – are two sides of the same coin. The latter has a touch of the folk of Dean Owens about it, for example, while “Three Old Guns” is authentic county. You can hear Gray holding back laughter on it too, which gives a real sense of fun to the recording.

Although the record goes to plenty of margins, then make no mistake it is bound together by a real class. Loosely “Americana” (whatever that means) there’s a sense of longing on the slower paced “Chickenwire”, but there’s a rock n roll edge to “The Other Man”, and the ballad “Sundown” is bleakness personified. All of which shows the skill of everyone involved here. It only works if the band is this skilled, Tom Jarvis on lead guitar is wonderful throughout, but never better than on “The County Line” (“it’s about a barbecue joint” says Gray).

“Back Alive” adds some harmonies, before it all ends with “When The Devil Comes Home”, a slow building, brooding thing that cuts loose to a real crescendo. Watching the recent CCR film they did the same thing at the end of their set, and yes, this is a pub in Sheffield and not the Royal Albert Hall, but the feeling is the same: you are listening to masters at work.

Rootsy rock n roll with a lot more going on besides won’t get a whole lot better, and ask yourselves I suppose why this was recorded in a tiny venue instead of the arena up the road. To torture that Credence metaphor even more, maybe it’s just some people aren’t the fortunate sons? Whatever, Ash Gray and The Burners are coming in hot here. Too good to be underground, that’s for sure.