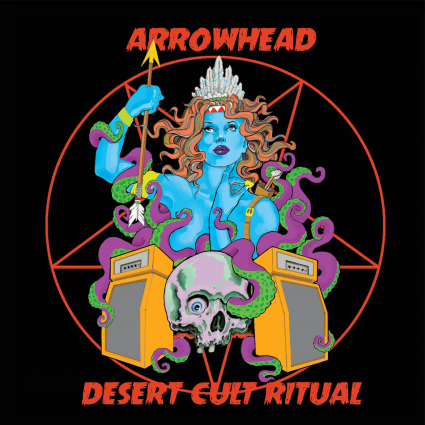 For those about to riff……

Sometimes, just sometimes, it’s easy to fathom a record out.

Many’s the time, as kids, we’d go to the record shop with either your pocket money or when we got a little older with whatever meagre wages we could save up and buy a record based on the cover.

This might seem odd to people in these days of the internet, streaming, downloading –  legal or otherwise – and a million ways to access music, but nonetheless that what MV and many others did.

In fact, so easy is it access records these days and so much choice is there (its no exaggeration to say that there are in excess of 100 albums sent to MV each week) that today’s kids won’t know the joy of just taking a punt. A favourite for us was that anything with the red and white Atlantic spine simply must be cool. This was based on the fact they had Skid Row and Led Zeppelin (mostly Skid Row if we are honest).

There’s an equivalent today. After all, as Cinderella once said: “the more things change, the more they stay the same.” We like to look down the song titles of albums and sometimes you kinda know before listening to it whether you’re going to like it or not.

To that end Arrowhead arrived with their new collection entitled “Desert Cult Ritual” and with one of the songs called “Weed Lord”. Now this reviewer is a teetotaller who has never taken drugs in his life (Christ even a Rennie is ingested under duress) but there’s very little we love more than the stoner rock grooves of those bands that wish it was still the 1970s and song titles like that are very much going to deliver.

And actually there’s way more boxes that Arrowhead tick too. First, they are a trio – always fun, and second they are an Australian band who has nothing to do with the AC/DC sound (which as much as we love Angus and the boys, is always worth bonus points).

Instead the eight tracks here come out with big dicks swinging, a whole pile of Sweet Leaf in one pocket and a shit load of riffs in the other, and its all tremendous. The title track locks itself into a mighty groove and sees no need to go anywhere else, “Hypnotiser” sounds a bit like a really fuzzy Black Sabbath and “Hell Fire” has a bit of a gallop – probably to the kitchen as it has the munchies, who knows?

Apparently singer/guitarist Brett Pearl (and if there’s a cooler name in rock n roll we haven’t heard it –  is the son of a self-confessed “hippy-dippy mom” with a record collection to die for. Brett was brought up on a staple diet of classic rock with Hendrix, Zeppelin, Floyd and Sabbath rarely leaving the turntable. It shows.

There is a timeless feel to the great brilliant “Bone Mountain” – a real highlight here not least because it uses the phrase “bad ju-ju” – while “Maneater Blues” and the cosmos infused “Rouge Asteroid” aren’t far behind.

A record where the groove is King and lyrics happen inbetween riffs actually ends with a full on instrumental, and “Dragon Whips It’s Tail” is a full on freak out. Live, you’d imagine it’s a real treat, too.

“Desert Cult Ritual” is only their second full length in seven years as a band, but its not the frequency, it’s the quality. And this is very good indeed.