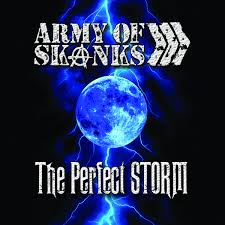 Army of Skanks are now a three piece and a great live band. This album has influences from some of the most musical punk bands such as The Damned, Dead Kennedys, Killing Joke, New Model Army, The Poison Girls, Cockney Rejects, 999 and the early rock and roll punk of the Pistols, Stooges and the MC5.

They play with fierce raw power and a great musicianship that is both fascinating and frightening in equal measure but as they are all on a par it works brilliantly. Opener ‘Trouble’ sets the tone for the rest of the album with wicked bass lines, tight drums great vocals and guitar that moves from riffing to complex solos with ease.

‘The Old Town Pub’ recalls 1983 and I’m sure if they are talking about Coventry this is somewhere I will have frequented about this time. The playing is spot on and the chorus very catchy, and the song ends with a tip to Cockney Rejects ‘Headbanger’. This album contains some real rockers ‘Pheromone Attack’ is an all-out rocker with tight drums, great bass and haunting guitar and ‘Burned Your Bridges’ and ‘Obey’ have a similar feel.

‘Skankabilly Blues’ is like the son of ‘Feel Alright’ complemented by a riff reminiscent of Easy Bay Ray of the Dead Kennedys. The quick-fire snare complements the guitar lines which move through haunting riffs to wonderful rock solos the Damned, the Stooges and the MC5 would be proud of.

‘Threat’ is a great menacing track with heavy bass and drums which indicates that Wendy is no doubt a fan of Killing Joke and New Model Army and has a similar moral code. ‘Exile’ follows a similar style with a really stomping beat and some excellent drum fills, vocals and harmonies and crazy guitar riffs. ‘Red Emma’ is a really pounding and strong song.

For me ‘Body of Water’ is the best track on the album and has everything, great lyrics, heavy drums, pounding bass and a guitar riff that you’ll be humming for days. ‘Superstition has a very different feel, and has a ska type riff and is a song L7 could have written.

It’s pretty clear they could play whatever they like, penultimate track ‘The Storm’ is a full of punk tune played really tight with a great chorus and a floating guitar riff. The bass and drums locked tight allow the guitarist the freedom to roam

The album closes with a poem called ‘Wolf Gang’. A great album where each track has its own character.