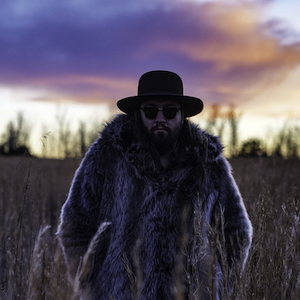 “A collection of songs that tell my story.” That’s how Arkansas Dave describes his self-titled debut record. And, if we start at the very end of the very last one, “Coming Home” fades out with the sound of children’s laughter and sadness as their dad goes on tour and is a chapter not often told.

The lyrics on that one too, show a different side to touring. “A faceless crowd, in a nameless place” offers the Camden, Arkansas native at one point, a particularly interesting thought, given that MV was one of those “faceless” people last year when AD came to England to play some acoustic shows.

Which one is the real one? Perhaps they both are. Certainly, this chameleon personality fits in with the musical twists and turns here. “On My Way” is a classic blusey rabble rouser,  bringing horns and Hammond organ and with just a whiff of the Jersey Boardwalk, while the slide guitar drenched “Think Too Much” has heard a few Stones songs but contains the particularly telling thought that the guitar is “the only thing that’s true to me,” as if being a musician, being on the road, living the life of the troubadour is the only option. Whatever pain it might bring.

The early part of these thirteen songs (the first act, if you will) stomps up a storm. “Bad Water” is as primal as you like, the cover of Tom Waits’ “Chocolate Jesus” builds into something that sounds like it belongs in a New Orleans jazz club, and “Squeaky Clean” is so positively, absolutely filthy that even if Dave isn’t arrested under the Trades Description act, then at least Robert Johnson is dancing with the Devil himself at the crossroads nodding in approval.

But that’s only half this journey. This story has more to tell. The remaining songs are much more mellow, melancholy and morose. “The Wheel” sounds to these ears like it is about to break into “Stairway To Heaven” at any point as it swirls, then “Rest Of My Days” has an almost trippy, hypnotic quality and “Jubilee” has an air of blissful happiness. It couldn’t sound more content if it tried, which is rather at odds with some of the others.

If there’s been a soul undercurrent to a much of the record, “Something For Me” brings it right to the fore and creates something timeless, and the country tastes of “Diamonds” reinforce the feel that this is effectively two albums in one, while the lyrics make clear that the singer’s heart belongs to the state that gives him his name.

One thing that Arkansas Dave hasn’t sounded throughout is fragile. “Hard Times” changes that, and if this is the concept record that it might just loosely be, then truly he’s ready for the end here.

Which brings us back full circle to where we came in and where this tour ends.

On his seminal “All The Way From Memphis” Ian Hunter put it perfectly. “Yeah it’s a mighty long way down rock ‘n’ roll. From the Liverpool docks to the Hollywood Bowl” he sang. This wonderful and multi-dimensional collection gives that concept a different slant. It also knows that wherever you go, whatever you do, there ain’t no place like home.