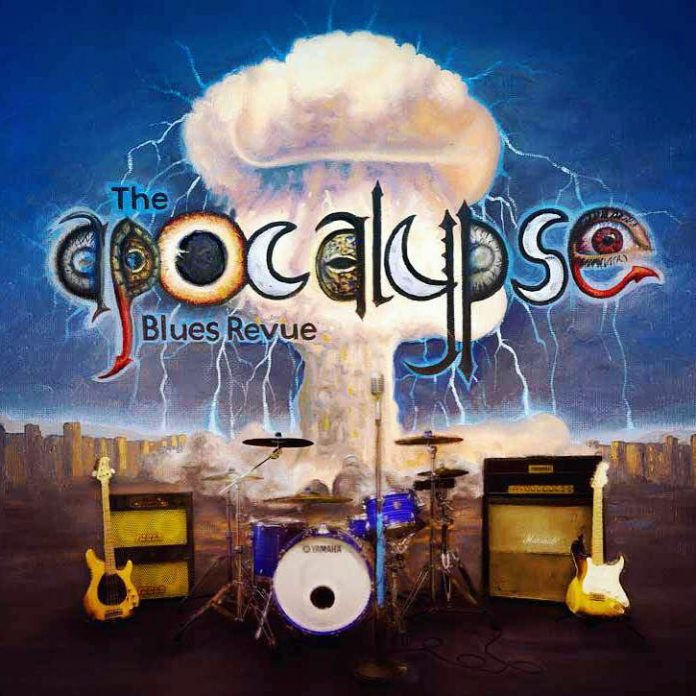 Maybe its cynicism – but more likely its years of proof of the subject – but when MV read that Shannon Larkin, drummer in multi-million sellers Godsmack had teamed up with the same band’s lead guitarist Tony Rombola to form a blues band, if we are honest hopes weren’t too high.

Side projects after all – with one or two notable exceptions like Down – tend to suck, and moreover as good as Godsmack are (and they are) there’s not a lot of blues evident there, is there?

But then it emerged that Mascot were putting it out – and when it comes to blues the home to Joe Bonamassa and lord knows how many more, does not mess about – then we heard it, and let the word go out from this time and place, the Apocalypse Blues Revue is a quite brilliant record.

Primarily it’s fantastic because its darker than your average. “Evil Is As Evil Does” might boogie its way to the nearest honky-tonk, but it wouldn’t need asking twice to go down a dark alley and kick your teeth in, similarly “Junkie Hell” pulls no punches in its tale of woe – imagine Trainspotting with Stevie Ray Vaughan instead of Iggy Pop as the soundtrack and you’d be somewhere close.

But “…..Revue” is also wonderful because of the playing of Rombola, who does an incredible job here, and the light, airy tones of “I Think Not” contrast superbly with the despair of the lyrics. And those lyrics are delivered by Rafer John (who Larkin apparently met in a biker bar) in a deadpan Jim Morrison way – “Whiskey In My Coffee” for example is pure Doors – and “The Devil Plays A Strat” is delivered with the air of a man who doesn’t think Satan is a match for him.

“The Tower” is slow, deliberate and mournful, while its follow up “Crossed Over” is more of a shuffling stomper, and there’s a gleeful air to “Blues Are Falling From The Sky” as John delivers its opening line of “I never learned my lesson” with something approaching glee.

Larkin showcases his skills on the primal opening to the fuzzed up “Work In Progress” and “The Devil In Me” is another which although, not straying too far from the blues path, adds a kind of stoner rock vibe and suggests that if they fancied going in that direction too, Apocalypse Blues Revue would be a mighty fine prospect.

As if to prove their musical versatility, “Blue Cross” is a Led Zep ish acoustic led affair, and one which is followed by a cover of The Doors’ “When The Music’s Over” which you guess that everyone involved here enjoyed very much indeed.

The Apocalypse Blues Revue is all the proof you need that gifted musicians who are doing it for love are formidable. If you leave your preconceptions at the door you will find something darkly glorious here.

Previous article
A Present From Lightscape
Next article
Phantom Menace