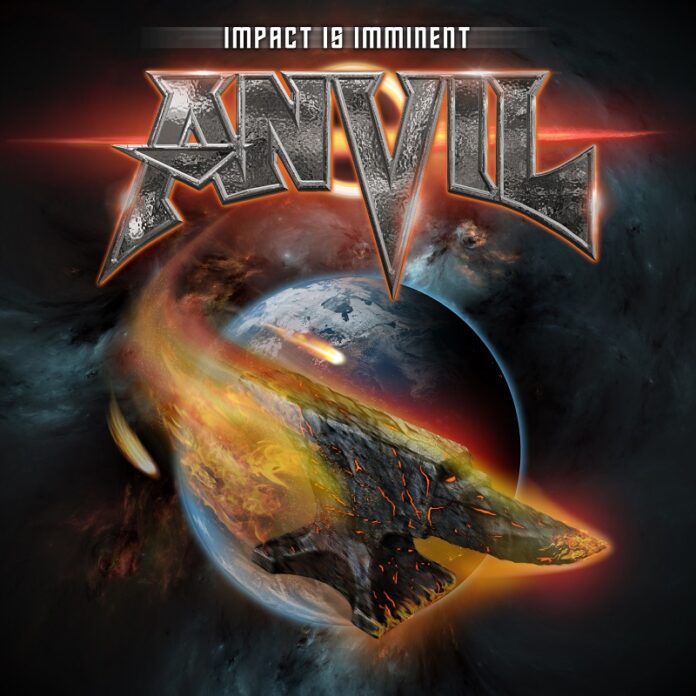 Formed by Canadian school friends Rob Reiner and Steve (Lips) Kudlow and for the past eight years supported by bassist Chris Robertson, Anvil release their nineteenth studio release `Impact Is Imminent` this month.

The album begins with `Take A Lesson` and has a radio tuning in, then of all people Dave Grohl affectionately introduces us to the band. We have pounding drums and shedding guitar riffs with a quite menacing growling vocal leading us through this opening number. According to  Lips, `Ghost Shadow` “is my sixth sense telling me I’m being watched! Could be internet trolls or paranormal phenomenon! Either way the song is heavy as fuck” and what he says is what it is. A fast paced almost speed metal thrash rock out.

`Another Gun Fight` slows the pace down and is almost a sleazy offering which had the sort of threat about it that Dave Mustaine and Megadeth were so adapt at. There`s a cracking guitar solo midway thr4ough. We return to an all-out assault with `Fire Rain` which will have you shouting the title out as it progresses.

`Teabag` has some intricate bass chords and has a kind of churning rolling AC/DC vibe. An instrumental not quite Joe Satriani but sort of heading there.  We have a straight up headbanger of a track  or rock out with `Don’t Look Back` which encourages us to move on with our lives and look forward. We have the obligatory blistering guitar solo midway through.

`Someone To Hate` is gloriously fast paced and at times it`s almost hard to hear what`s being sung. We have an extended guitar solo that to me is up there with the best of them. There`s no let-up in pace as the guys share `Bad Side Of Town` which to me sounded more like the kind of stuff Maiden would deliver.

I`ll let Lips explain what `Wizard´s Wand` is about. “Originally the number was called ‘Give Me The Goods’ and went “Give me good music, give me the goods”. But somehow I wasn’t happy with that. I closed my eyes, concentrated on the music, and listened to my subconscious. Suddenly the line “The wizard’s wand with just a wave, the wizard’s wand all of us to save” came to my mind. Out of nowhere, the whole message was there: What would I actually do if I was a wizard? I’d change the world for the better! Once I’d found the theme, ‘Wizard`s Wand’ was finished in ten minutes flat.”  It`s a churning driving rhythmic slice of classic rock. There`s a cracking riff laden intro `Lockdown` which I found quite mesmeric as it washed over and around me. I hope this doesn`t come over as trite but I thought it was a quite mature sound for Anvil.

`Explosive Energy` is a real thumper and brought to mind classic Deep Purple, maybe Ian and the boys should give it a listen. We have a further powerful intense  potent offering with `The Rabbit Hole` which really races along, a track that`ll go down a storm when played live.

`Shockwave` is a mid-paced forceful submission not aggressive or hostile but has that challenging feel about it. This release closes with another instrumental in `Gomez` with brass splayed throughout. A bit different, a kind of seething fermentation of controlled noise and an interesting way to close out this album.

A friend has said that Steve Kudlow will never be mistaken for a poet laureate but to me that doesn`t matter when you can deliver a fifty minute slice of hard rock that will take you away from all the shit in life and leave you with a massive smile on your face.

As for `Impact Is Imminent` all I can say is Welcome back Anvil.