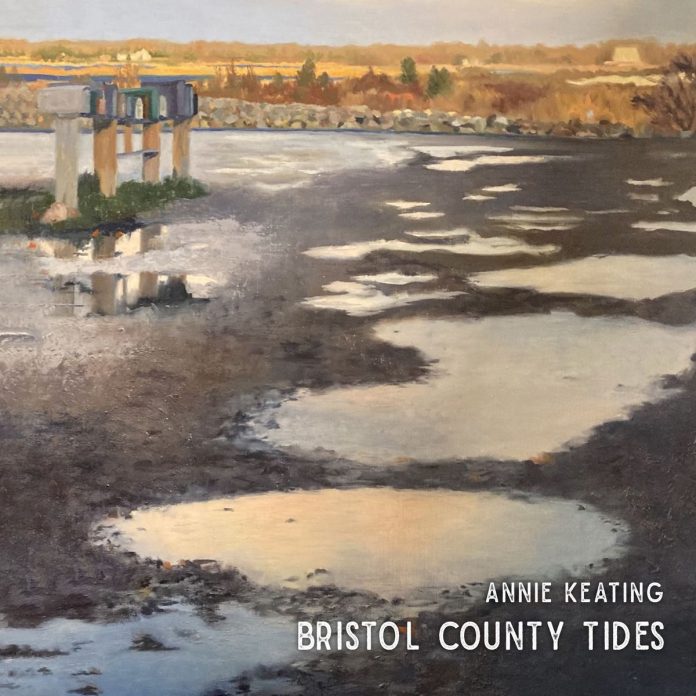 I have wondered, if I had any talent for such things, how I would approach writing about the last 18 months or so, and the answer is I honestly don’t know. There are many ways, really, from discussing how we all have been failed by governments and capitalism and its pursuit (it should be a source of shame to everyone in the UK for example that more billionaires created in the last year than at any other time in recorded history), or you could use the time for personal reflection.

“Bristol County Tides” is from the second option, but like all the best (and Annie Keating is surely up there as one of those) it takes on a universal sense that will resonate with everyone that hears it.

The stories on “….Tides” are interesting because they are personal, it seems, but done in such a way that it doesn’t really matter how you connect with them.

The reason I say that is that these 15 songs don’t conform to any pattern. Take the rock n roll of “Third Street” with all types of characters doing all types of things. “Lets see what fun we can find” offers Keating, but as she does, it does appear to be the case that she’s never had a seconds problem finding a good time in her life.

Which is balanced quite wonderfully by the laid back blues of “Kindred Spirit”, in which she lays a troubled past bare through the medium of another, as she does so well frequently throughout.

“Marigold” focuses on a desire for change, while the utterly glorious “Nobody Knows” takes on an almost confessional air given her half-whispered vocals. “What tomorrow’s gonna bring, nobody knows,” she sings and in many ways that seems to encapsulate the downright uncertainty of the album.

It frequently feels like a journey, and that is surely deliberate given the record takes its name from the place in New England that Keating and her family sought refuge in as they got out of Brooklyn as the pandemic hit.

A word too, for her band, as they are clearly talented (and having seen them live I can confirm that Annie and her boys whip up a storm), here they veer from blues on “Full Moon Tide” to something tinged with a real regret on “Half Mast”, to something built around the organ lick of Todd Caldwell, as “High Tide” is, as it requests we forget the world for an hour.

“Kindness” sees Caldwell back to the fore again, as he supplies a mournful piano, although “Hank’s Saloon” is anything but mournful. Owing more to the Celtic flavour of Dropkick Murphy’s than it does to Hank Williams.

And that’s why the comparisons that Keating often engenders (Lucinda Williams, John Prine etc) kind of make sense, but don’t tell the story. For one thing she has a distinctive, road-worn voice. “Song for A Friend” proves that, while the beautiful “Doris” – a song for her mother – is done with a proper tenderness.

A lengthy album, yes, but one with a class throughout. “Bittersweet” is more fragile than some of the others, perhaps, but there’s a low slung groove to “Lucky 13”  that ploughs another furrow altogether. “We’ll lose our inhibitions by midnight” seems a key point, but also seems like a requirement.

“Shades Of Blue” has a weary air, but seems to find some beauty, and there’s a stoicism about the overt country shuffle of “Goodbye”.

“Bristol County Tides” is Annie Keating’s eight album, it might be her bravest and most ambitious, yet at the same time it is arguably the most universal. Which given that the last period of history has taught us all how connected we are and how distances make no difference, might be the most salient point these 15 songs make.